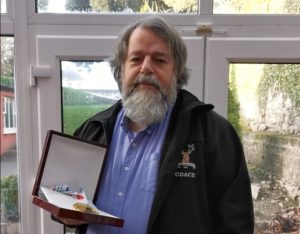 Aidan Farrell will be honoured at the virtual 2020 Federation of Irish Sport Awards, proudly supported by EBS.

Well-known Roscommon Town businessman Aidan Farrell will receive nationwide recognition for his dedicated work with Creggs RFC this week when he receives the Roscommon award at this week’s virtual Federation of Irish Sport Volunteers in Sport awards, proudly supported by EBS Mortgage Masters.

Aidan has been the driving force behind Creggs RFC, including overseeing the completion of the first World Rugby-accredited 3G pitch in Connacht as well as two new grass pitches — all of which are available to local schools and sports clubs.

His love of sport in general and his awareness of the importance of sport in the development of young people has driven him to bring this development — and indeed the club itself — to new levels that everyone in the local community is both proud and thankful for.

Aidan’s vision of opening up rugby to all includes targeting young girls and women to become involved in sport, and the club’s policy of making their facility available to schools and other sports clubs has increased participation for hundreds of people from small children to adults.

He has given, and continues to give, countless hours of his time and expertise to both Creggs RFC and Roscommon CBS, and has been extremely generous in his sponsorship of other sports through his business.

Aidan will be honoured this week at the special virtual awards ceremony on this Wednesday at 7 p.m.. The awards will be streamed live on the Federation of Irish Sport’s Facebook page.