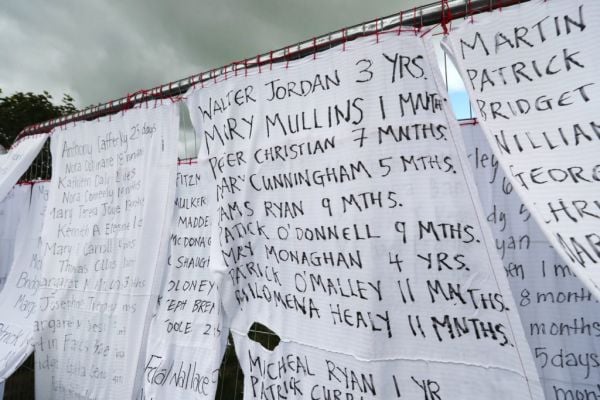 Survivors and their families have reacted with shock and dismay at the report into Ireland’s mother and baby homes.

The Commission of Investigation into Ireland’s mother and baby homes, where unmarried mothers and pregnant women were sent from the 1920s right up until the 1990s, was published on Tuesday after years of delays.

Annette McKay, 66, is a Manchester woman whose mother, Maggie O’Connor from Co Galway, was sent to the mother and baby home in Tuam when she was 17.

She believes her older sister could be among the 800 babies and infants thought to be at the home, which was run by the Bon Secours, a Roman Catholic religious order.

For years she has lived with the hope that her sister’s remains could be exhumed and identified – until now.

She said: “I’m very sad. I was never optimistic. I was always full energy, that a fight could be won, and now I don’t feel that. I feel defeated.”

She added: “It’s very, very hard today to look at a picture of my mother and think ‘another year mum, and we’re no further on.’ It’s been a tough day.”

While the report talks about a process of “respectful reburial”, this will not begin until 2022, and falls far short of what people like Ms McKay were previously promised.

Campaigner Teresa Collins was born in December 1963 at Sean Ross Abbey in Co Tipperary. She was six-months-old when her grandparents paid money to the religious order so Teresa and her mother could return home.

The 57-year-old said: “I was very disappointed because they never took blame for what happened – not the State or religious order.

“The religious orders said that families did this and we were put in there but if they didn’t want us they should have put us out. They made money out of us.

“I am dumbfounded by what I have read so far. My grandparents brought me back and I lived with them – they brought me back home proudly and I put that into the commission report.”

She said she was “shocked” by the mortality rates at Sean Ross mother and baby home.

Susan Lohan, co-founder of the Adoption Rights Alliance, was critical of the report and said the commission has “trivialised” human rights issues.

“They haven’t used the big ticket headline such as “forced adoption” and “child trafficking” – there is nothing deemed to be international human rights language,” she said. “It’s deeply disappointing.”

“We also discovered that they have dismissed critical evidence given by survivors, particularly people of mixed race ethnicity.

“The commission rather boldly stated that there was no evidence that such individuals were discriminated against when it came to adoption.

“Any person of mixed origin I met have told me they weren’t put forward for adoption and it said on their file they were not suitable for adoption because of their race – it’s appalling. The commission is telling those people that their evidence is not credible.

“We are going to have to spend months rebutting the worst conclusions of the commission of investigation.

“It is a disgrace from what I can make out and my worst fears have been realised.

“The Taoiseach also seems to be determined to go ahead with an apology on Wednesday when survivors won’t even have read the report.

“It is deeply disappointing but not surprising.”

A new webpage with information specifically for former residents of Mother and Baby Homes has been set up. Additional mental health supports provided by the HSE are also available to former residents. Details of these supports are available on www.yourmentalhealth.ie.