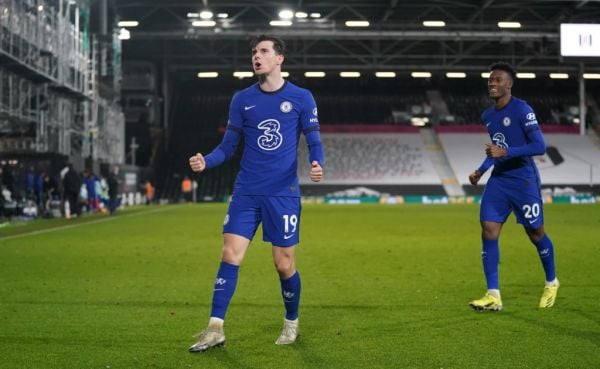 Mason Mount scored the only goal to hand Chelsea a 1-0 victory over 10-man Fulham at Craven Cottage.

Frank Lampard’s side’s three-match winless run in the Premier League stretched back to before Christmas but they were able to capitalise on their numerical advantage when the 22-year-old drove past Alphonse Areola in the 78th minute.

The Cottagers had gone into the game unbeaten in their last five Premier League matches but were unable to hold onto a point, a challenge which was made much more difficult when wing-back Antonee Robinson was sent off for a diving tackle on Cesar Azpilicueta just before half-time.

The result moved Chelsea just one point behind Jose Mourinho’s Tottenham, while Fulham remain in the relegation zone.

In the 13th minute, Areola was forced into his first save of the game after Olivier Giroud sliced a ball towards the corner, but the French shot-stopper was able to dive and palm the ball round the post for a corner.

Chelsea came close to breaking the deadlock in the 28th minute when Mount’s shot rebounded off the crossbar only for Areola to make an important save to deny Antonio Rudiger’s header from the following corner.

Fulham had a chance to take the lead after a clever move but Ivan Cavaleiro, who had netted his second goal of the season on Wednesday against Tottenham, scuffed the final shot and it went wide. Ademola Lookman had back-heeled the ball to Robinson who squared it for his wing-back partner Kenny Tete before finding the Portuguese striker, but he was unable to capitalise.

Just before the half-time break, the hosts were reduced to 10 men when Robinson was immediately shown a red card for a flying tackle on Chelsea captain Azpilicueta. VAR quickly reviewed the decision but agreed with the referee, with Robinson having both feet off the ground.

At the start of the second half, Chelsea looked to capitalise on their numerical advantage and press forward as Fulham were forced back into their own third.

However, the home side dug in and were able to make blocks and key challenges to deny the visitors any clear-cut opportunities.

The Cottagers had their own chance to break when Ola Aina ran down the wing before cutting into the middle to get his shot away from outside the area but his effort went over the bar.

Tammy Abraham tested Areola with a header just moments after coming on, and Christian Pulisic was close to tapping in the opener from a well-weighted cross from the right but it was just too far in front of him.

Chelsea eventually benefited from their man-advantage and were able to find a way through the resolute Fulham defence when the ball fell to Mount in the area, who fired it past Areola to break the deadlock for Lampard’s men.

Ben Chilwell sent in a cross from the left and Areola decided to palm it away but instead sent it back into play, where it fell to the England international who drove low and into the back of the net to secure all three points.