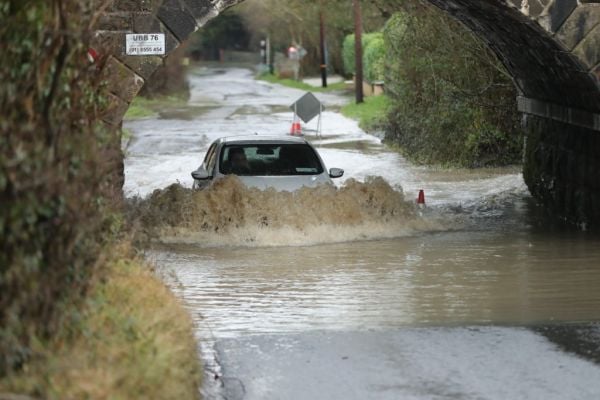 Heavy rainfall due to Storm Christoph has led to flooding in some parts of the island of Ireland as people have been warned to brace themselves for cold and unsettled weather.

All current warnings see here, please click on tab for warnings for that day :https://t.co/Xg3aMJlyuS pic.twitter.com/3u0otJ94hm

Met Éireann has issued a weather advisory for the island, warning it will turn colder on Wednesday with conditions becoming increasingly wintry for the rest of the week.

The forecaster said there will be a risk of frost and icy conditions, with falls of sleet or snow at times.

The advisory comes into place at midnight on Wednesday and will last until Sunday night.

Here is the latest cloud and rainfall forecast from our HARMONIE weather model. It covers the period from now until 12:00 on Thursday.

It comes as a yellow rainfall warning remains in place for Connacht and counties Longford, Louth, Westmeath, Meath, Cavan, Monaghan and Donegal.

Met Éireann warned heavy rainfall would lead to accumulations of between 30mm and 50mm, in turn bringing a risk of some river and localised flooding.

Two cars were towed away in Co Meath on Tuesday afternoon after getting stuck in flood waters on Pilltown Road in Bettystown.

In Northern Ireland, Storm Christoph brought heavy rains to much of the region on Tuesday afternoon.

#StormChristoph will bring heavy #rain to many parts of Wales, Northern Ireland and northern England this afternoon

Drier for parts of Scotland and southeast England

A yellow rain warning is in place for counties Antrim, Armagh, Down, Fermanagh, Tyrone and Derry.

The UK Met Office said heavy rain and hill snow would lead to some disruption on Tuesday and Wednesday.

The forecaster warned there is a small chance that homes and businesses could be flooded, causing damage to some buildings.

There is also a small chance of fast flowing or deep floodwater causing danger to life.

Where flooding occurs, the Met Office said there is a slight chance of delays or cancellations to train and bus services.