The draws for the 2021 Connacht U-20 and minor football championships were held tonight with very different results, with the minors facing into an incredibly difficult route to retaining their provincial title while fortune smiled on the U-20 group to a much greater degree.

The U-20’s will play Leitrim on Saturday April 3rd, with the winning side advancing to a semi-final clash with Sligo a week later. In the 2018 minor championship, played on a round robin basis, Leitrim and Sligo lost every game (other than when they played each other) by at least 14 points. Sligo has shown considerable improvement in the last couple of seasons, but this will still be seen as the soft side of the draw, with Mayo drawn against a hotly fancied Galway team on the other side of the draw. 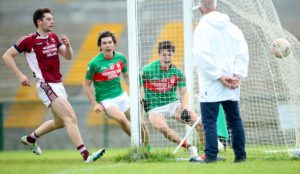 Rúaidhrí Fallon and Ben O’Carroll, seen here in action for St. Brigid’s in the Roscommon SFC semi-final, will be key figures for the Roscommon U-20 side this year.
Picture: INPHO/James Crombie

At minor level, Roscommon will have to beat not one but both of the traditional powers in the province, just to get back to a Connacht final. On Friday, April 2nd, the night before the U-20 fixture against Leitrim, Roscommon will take on Mayo. The winners of that game will play Galway a week later, with Sligo and Leitrim contesting the other semi-final, also on Friday April 9th. The Connacht final is pencilled in for Tuesday, April 13th, just three days before the scheduled date for the U-20 final.

All games in both championships are due set to take place at the Connacht Centre of Excellence in Bekan, Mayo.