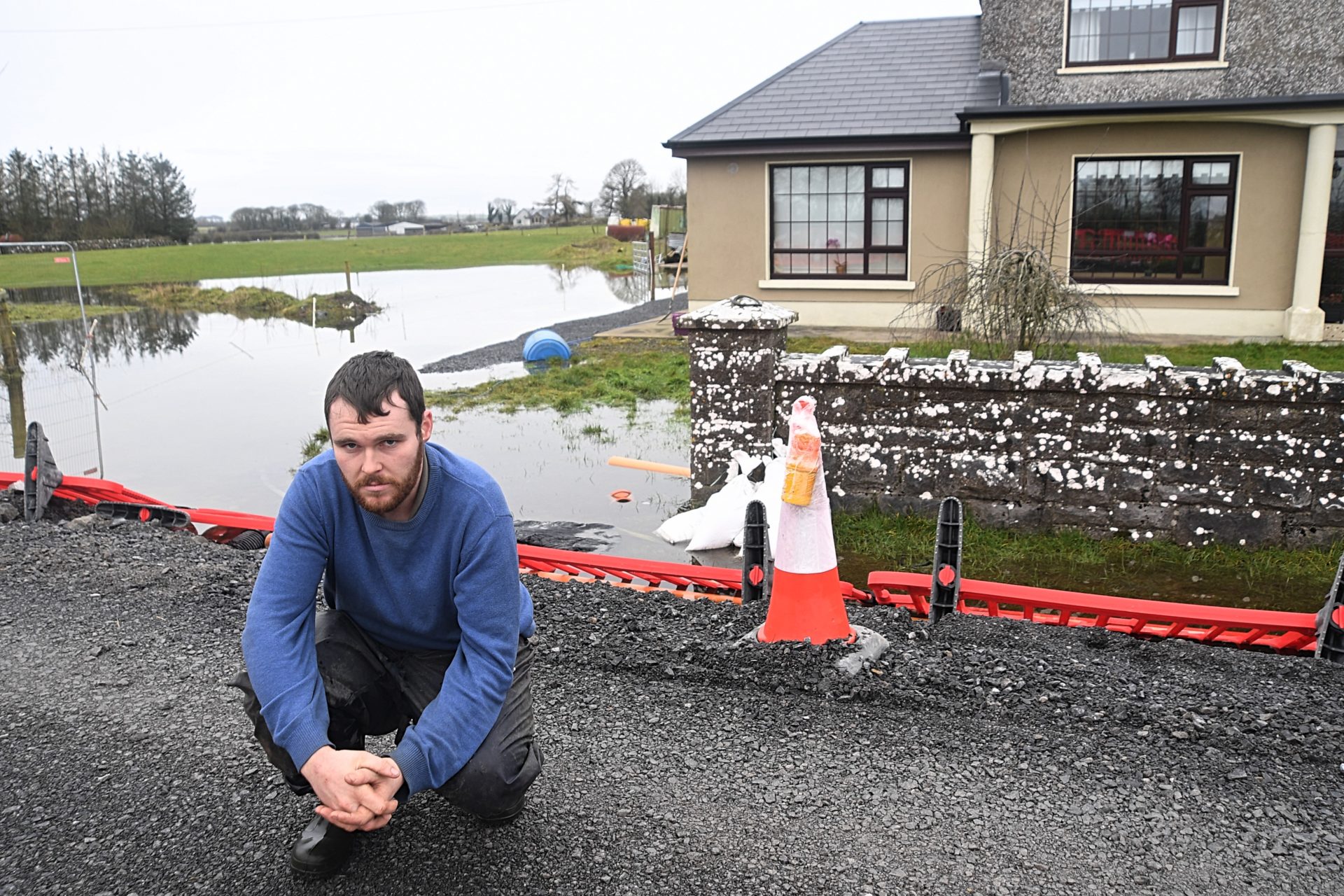 With heavy rain overnight and more rain forecast, Padraig Beattie from Ballagh is worried that the water now threatening his home, where he lives with his mother, will be unstoppable.

Where once the lough’s water level rose and fell, it is now persistently high, and many believe it is a permanent lake, describing it as a former turlough.

In April 2016, the water was on the footpath of the house. “By February 1st it will probably be gone past its former maximum height,” he said. “With two months of rain left to come, of course, I am afraid. It will come in, if it is not being pumped out.”

Two pumps are now operating full time at the property to keep the water at bay, said Mr Beattie, “they are just able to keep it down”.

“The water has gone well into the farmyard but it is a couple of inches below the footpath. I had to move stuff around the yard, trailers, and the like. The fencing stakes were genuinely starting to float.”

He said that his mother had lived at the house all her life.

“This happened before in 2016 but she never remembers this happening prior to that,” he said. “They said it was only a fluke, a once-off, and they have forgotten about us since.”

Mr Beattie, who is a farmer, said action had to happen now before the situation became even worse.

“The council will be out here every year pumping and putting down sandbags for the next ten years unless something is done. They can’t keep raising the roads,” he said. “I am looking for a solution whether it be an overflow pipe or something else. The overflow pipe would be the best though.”

A meeting is scheduled to take place this Wednesday between Minister for Agriculture, Charlie McConalogue and the Minister for the Office of Public Works, Patrick O’Donovan to explore measures to address the ongoing threat of flooding.

Local TD Denis Naughten received confirmation of the meeting last week. A further meeting is to also take place with the key State stakeholders. This was previously agreed to by Minister O’Donovan at the request of Deputy Naughten, which was made following the continual rise of floodwaters over Christmas and revised flood data provided by Cllr Laurence Fallon. This data indicates that 2021 will be the most challenging year to date in managing water levels on the lake.

“The meeting of stakeholders is expected to include all of the key players including the OPW, Department of Agriculture, Roscommon County Council, the National Parks & Wildlife Service, and the Geological Survey of Ireland which has been monitoring the situation on Lough Funshinagh over the last five years,” stated Deputy Naughten.

“At the request of Cllr Laurence Fallon, I have also contacted Minister Malcolm Noonan, the Minister with responsibility for the National Parks & Wildlife Service, seeking an immediate review of the Special Area of Conservation status of Lough Funshinagh in light of the impact the flooding is having on the functioning of the former turlough.”

Fianna Fáil Senator Eugene Murphy said he was hopeful that a Ministerial visit to Lough Funshinagh is “imminent”.

“I am hopeful that both the Minister for the OPW Patrick O’ Donovan and the Minister for Agriculture Charlie McConalogue will visit Lough Funshinagh and meet with a representation from the area. I have been pressing this issue for some time,” said Senator Murphy.

“The OPW has turned down the proposal to build an outflow drainage pipe at the lake as they claim it could have serious ecological effects on the turlough- but what about the serious effect the flooding is having on landowners and local residents- they are the victims in all of this. The lake is continuously rising and if levels keep rising many of these people will have to be relocated.”

He said it was “amazing that despite all the experts from engineers to geologists that no viable solution can be found”.

“I have invited Minister O’ Donovan and Minister Mc Conalogue to visit Lough Funshinagh in a bid to keep the pressure on to find a solution and I am hopeful that a Ministerial visit to the area is imminent.

“It’s simply not good enough to leave things in limbo in this manner,”