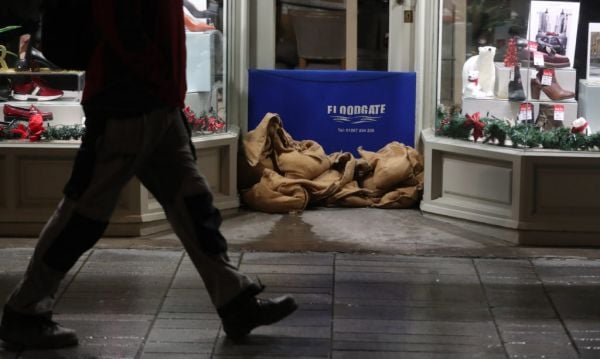 Homes and businesses in parts of the midlands and west are urged to be alert to flooding over the next 24 hours.

A status yellow rainfall warning is in place until 9pm tonight across Connacht, the midlands and along the Border.

Met Éireann has said there is a risk of some rivers overflowing, as up to 50 millimetres of rain could fall in places.

Junior Minister Patrick O’Donovan, who has responsibility for flooding, has warned communities along the River Shannon to be on alert.

“It takes quite a long period of time for that water to take an effect, and it can be several days later before the Shannon unleashes its power in a very incremental, creeping but yet powerful way, so these are areas that we’re obviously very concerned about,” he said.

“In a lot of cases the water level is still high, ground is still saturated, so prolonged spells of heavy rain is obviously going to cause an awful lot of difficulties,” he added.

“My advice would be to make sure that you’re keeping up-to-speed in what’s going on, and obviously those communities that have experience of this should seek and get and follow the advice from their local authority.”

Here is the latest air temperature 🌡️ , rainfall 🌧️ and cloud ☁️forecast from our HARMONIE weather model. It covers the period from now until Thursday morning. More weather forecast information for the coming days and outlook period can be found here: ➡️https://t.co/9gKN6SVok4 pic.twitter.com/yqG5laUGXM

Met Éireann has issued a status yellow warning for the province of Connacht as well as counties Cavan, Longford, Louth, Meath, Monaghan and Westmeath.

The warning came into force at 9pm on Monday and will remain in place until the same time on Tuesday evening.

Tánaiste urges employers to give staff a pay hike