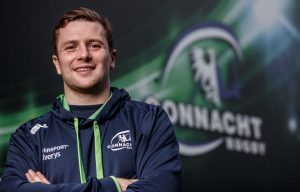 Jack Carty will make his 150th appearance for Connacht in Friday evening’s Guinness PRO14 game away to Dragons at Rodney Parade (kick-off at 7.35 p.m.).

The Ballymore native is one of three Roscommon players in the team to face Welsh outfit. Niall Murray will make a welcome return from injury, while Denis Buckley will line out in the front row.

Findlay Bealham will also make his 150th cap for the western province. Between Bealham and Carty, they have won 24 caps for Ireland. Carty made his professional debut for Connacht in 2012.

“This is a must-win for us, given results of the last few weeks. While our home form has been disappointing, we’ve had honest reviews of what’s gone wrong and the reaction in training has been good.

“Our away form has been a positive for us this season, so we’ll look to keep that going tomorrow albeit against tough opposition and a tough place to go in Rodney Parade,” said Head Coach Andy Friend.