‘We must stay in Division One’ — Smith 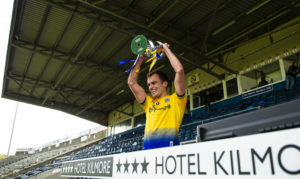 Enda Smith lifts the Division Two League Cup at the end of October.

Enda Smith has thrown down the gauntlet to his Roscommon team-mates, insisting that they must do everything in their power to stay in Division One when intercounty action finally resumes later this spring.

In a wide-ranging interview on The Sideline View podcast with Darragh O’Connor, the Boyle player felt that Roscommon were still trying to unearth a consistency to enable them to compete with the top teams on an annual basis.

“It has to be the aim (staying in Division One). We’ve been going between (the top two) divisions for the last few years, so we need to consolidate in Division One now.

“It doesn’t matter how we do it, whether that’s finishing top of the group or by winning a play-off. We’re just too used of going up and down. We need to be playing the top teams every year, to get to that level of consistency because we’re not there yet,” he highlighted.

Smith reflected on his underage career with Roscommon, noting how the talented teams he was involved with played some “off the cuff” football in winning provincial titles and taking on some of the best teams in the country in the latter stages of the All-Ireland championships.

He talked about former manager John Evans giving “younger players a chance”, which allowed him get his foot in the door of the Roscommon senior panel in 2013. He also reflected on how the players appeared to be “mentally shot” in 2016 when Roscommon were well-beaten by Galway in the Connacht final replay before bowing out to Clare six days later in the All-Ireland qualifiers.

He described the 2017 Connacht final victory against Galway as his greatest day in a Roscommon jersey, revealing that he knew they were going to win the game ten days beforehand.

He also reflected on last November’s disappointing provincial championship exit to Mayo in a game that was played behind closed doors in Dr. Hyde Park.

“It was the low point of the year, in terms of the performance, just how flat we were, just the way it went. We were never in the game. It was really a six-point hammering. We never looked like getting close to it at all, which was probably the most disappointing part.

“It’s hard to put your finger on it. We never got to the pitch of it, and that’s down to Mayo as well. They were in our face and showed that they weren’t gone away. People talk about them going away but they’re never gone away. With Mayo, there’s a standard they get to in every game and if you don’t match them, you’re in big trouble. We got what we deserved on the day.

“You’d miss the crowd, but it wasn’t about the crowd that day. Mayo have as big a crowd as we do on their good days. It might have been even tougher if their crowd was there. They were on top for most of the game and their crowd would have been cheering ten times louder.

“There could have been 100,000 people there, all from Roscommon, and it wouldn’t have made a difference. We just didn’t play well on the day. No complaints, no excuses, we were just really poor.

“As players, we have to figure out why and make sure that it doesn’t happen again. It’s becoming too prevalent in our performances, where we play well for a while and then have a massive dip. It’s something we need to look at,” he explained.