Next steps of vaccine rollout confirmed as AstraZeneca doses arrive 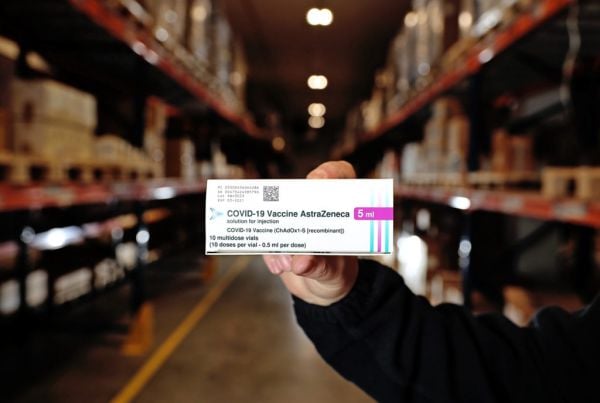 The first 21,600 doses of the AstraZeneca Covid-19 vaccine have arrived in the Republic.

The doses were delivered into the national cold chain store in Dublin from Belgium earlier on Saturday afternoon.

They will be distributed to healthcare workers from Monday, according to the Health Minister.

Stephen Donnelly described the delivery as a “big day” for the country, posting video footage of the vaccine’s arrival on social media.

🚨 Big day. The @HSELive has just sent me this video of the first 21600 doses of AstraZeneca arriving this afternoon from Belgium to the national cold chain store in Dublin. First doses to be given to healthcare workers on Monday. 👏 well done to all pic.twitter.com/b6KsgljCFG

The vaccine has been described as a “game-changer” for the State’s rollout, as it does not require the same specialist ultra-cold storage used for the mRNA vaccines manufactured by Pfizer and Moderna.

However, the Taoiseach has confirmed that the Pfizer and Moderna vaccines will continue to be administered to those aged over 70 in Ireland, due to limited data on the efficacy of the AstraZeneca jab in older people.

The decision has led to a reworking of the State’s vaccine rollout plan, with some priority groups set to be brought forward for an earlier vaccination with the AstraZeneca jab.

Those aged 70 and over are now set to begin receiving the Pfizer and Moderna jabs from GPs from February 15th — in nine days time — after the HSE and Irish Medical Organisation (IMO) agreed the revised plans.

The rollout will begin with those aged over 85, with The Irish Times reporting that doctors hope to complete vaccination of this age group by March 8th, with second doses administered exactly a month after the first shot.

Most patients over the age of 70 will receive the Covid-19 vaccine from their own family doctor practice.

However, doctor surgeries in rural areas with fewer than 200 patients in the age group will “buddy up” to administer doses.

A number of large-scale vaccination clinics are also set to be established in Dublin, Cork and Galway under the new plans, with the first to be set up at Dublin City University (DCU) where patients attached to 121 practices across the capital will be vaccinated.

Chief executive of the HSE, Paul Reid, has said it will likely be the middle of April before all those aged over 70 are vaccinated in the State.

Mr Reid said the original target to complete vaccination of this cohort, first set for the end of March, was not currently realistic due to supply issues.