Dermot Earley to feature on Laochra Gael this evening 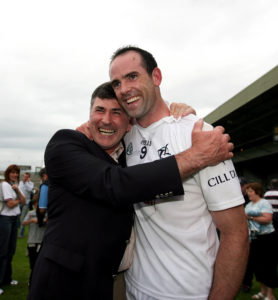 The son of one of Roscommon’s most famous footballers will be featured on TG4’s hugely popular Laochra Gael series this evening.

The series, which has already featured former Roscommon and St. Brigid’s goalkeeper Shane Curran, will wind up on the story of Dermot Earley Jnr’s sporting career.

Named after his legendary father, Dermot Earley was determined to make a name for himself. He did just that when he was at the heart of Kildare historic’s 1998 campaign while still in his teens. The Lilywhite reached the All-Ireland final that year before being defeated by Galway.

The programme will chart Dermot Jnr’s career alongside his personal life, which deals with the untimely death of his father in 2010 and how he coped when he was diagnosed with testicular cancer at just 23 years of age eight years earlier.

The final Laochra Gael of the series takes place on Thursday, February 11th, at 9.30 p.m..