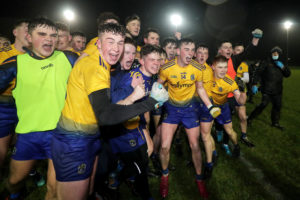 Roscommon U-17 football manager Emmet Durney remains “fairly confident” that his 2020 Connacht minor football champions will still have to opportunity to compete for All-Ireland honours, despite the frustration of another delay to last year’s championship.

Roscommon beat Sligo on St. Stephen’s Day and are scheduled to face Kerry in the last four. But Wednesday evening’s confirmation that intercounty GAA has been removed from the government’s Level 5 Living with Covid plan means that Durney and his side face another prolonged delay.

“It’s nothing new to us. This will be the fourth time that we’ll have to start up again when the ball eventually gets rolling,” he told the Roscommon Herald on Thursday afternoon.

The Roscommon players continued to work hard during January following their provincial triumph, and were just returning from a two-week break before another four weeks of training ahead of their expected return to collective training in March. But those plans are riddled with uncertainty once more.

“Everything has to be taken into context. There are people losing their lives and their jobs as a result of this pandemic, so there are far more important things than football.

“But from a purely footballing point of view and as manager of this group of players, it’s extremely frustrating. There appears to be no end in sight. We’re in no man’s land really, although I’d be fairly confident that it will still be played. The GAA has a history and tradition of finishing competitions, whenever that is,” he pointed out.

On reflection, Durney feels that the competition should have been run alongside the All-Ireland senior football championship last winter, highlighting that there were no cases of Covid-19 within his squad.

“The number of cases that came from actual intercounty panels last year was little or nothing. From my point of view, our lads took it very seriously. They were very diligent in terms of how they prepared, not only in football terms but how they adhered to the public health guidelines at the time.

“I couldn’t speak highly enough of them. They have been a credit to their clubs, families and their county. All this disruption, and they have just got on with it at a time when they should have so many other things going on in their lives. Motivation has never been a problem for them,” he explained. 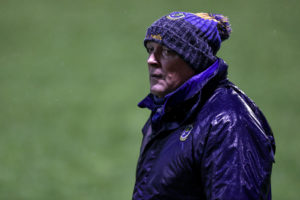 With eight players from the current panel still eligible for the 2021 Roscommon U-17 team, Durney confirmed that the current management team won’t be taking charge of this year’s side.

“We had a very constructive meeting with the county board about it. We weighed up everything and felt that it wouldn’t be right to look after this year’s team. You’d essentially be trying to run two panels side by side, and you might get caught somewhere in between. Our sole focus is building on our Connacht championship success with the group of players we have and getting to an All-Ireland final,” he clarified.

On the plus side, the prolonged delay may work in favour of players like Ian Harney, Conor O’Reilly and Mark Watson who are recovering from long-terms injuries.

“The lads are working their way back to full fitness, but we just don’t know if they’ll be involved yet. It will be another eight weeks at the earliest before we’re possibly given the green light to return, so it all depends on their powers of recovery.

“But we’ll give them every chance. Like the rest of the lads, they’ve done everything we’ve asked of them. Three to four weekends will finish the competition, so whenever we get the chance to represent Roscommon in an All-Ireland semi-final, we’ll be ready,” vowed Durney.