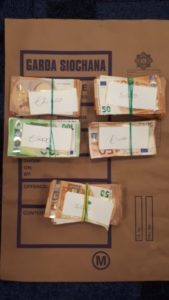 Gardaí have recovered more than €18,000 worth of cash following a search of a property in County Roscommon under Operation Thor.

Gardaí attached to the Roscommon/Longford Divisional Drugs Unit carried out a search of a house in the Frenchpark area of Roscommon at approximately 2 p.m. on Tuesday (yesterday).

During the course of the search, €18,400 in cash was recovered and has been seized under the Money Laundering Act 2010.

One man in his early 40s was arrested at the scene. He was detained at Castlerea Garda Station but was released without charge yesterday evening.

A file is now being prepared for the Director of Public Prosecutions.