St. Ronan’s is a way of life for Killoran 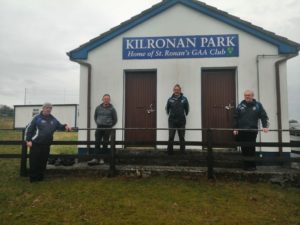 All across the midlands right now, particularly in the communities close to Lanesboro and Shannonbridge, communities are trying to envisage what their future will look like in the absence of a major employer that has offered a livelihood to so many people for generations.

In Roscommon’s most northerly outposts around Keadue, Arigna and Ballyfarnon, that’s a reckoning they’ve been through already with the decline of the mining industry. Over 30 years have passed since the closure of the Arigna mines, and having lived through that turmoil, Damian Killoran has dedicated a lifetime to making sure that the other half of the parish’s identity — St. Ronan’s GAA Club — continues to thrive and survive.

“It was always a thing when you were playing for St. Ronan’s, fellas saying to you ‘ye should just stick to the mining lads, don’t be trying to play football’. It even happened in underage games, which made no sense at all!” he recalled.

“It was a strange thing to say for a lot of reasons, but mainly because we were proud of the mines, proud of being able to work locally and to raise families here, and if it was meant as an insult, we didn’t take it that way,” he continued.

The mines came and went, but Killoran’s involvement with his club remained constant. Underage coaching evolved into coaching the club’s leading adult teams. A variety of committee roles also came his way, before in recent years he and a handful of others took on the challenge of maintaining Kilronan Park, a task he takes immense pride in.

“We’ve had some great days in this club and while I didn’t feature in a lot of the bigger games during my playing days, I was always stuck in the middle of the craic afterwards, and like so many other people, you find that the club becomes a way of life for you,” he highlighted.

“A lot of the jobs I’ve had in the club, you didn’t have to go looking for them, they just found you, but you’d never be sorry you took anything on, you always enjoyed it,” he enthused.

When he takes this call, he’s not long back from the field having been busy clearing out gutters, and he’ll be back the next day for some pitch maintenance work.

“There’s myself, Sean (Martin), John (O’Connor) and Francis (Cooney), and we have our own craic between us. We don’t get a lot of high-profile games here, there are only a few clubs local to us and they’re spread across the different grades so we’re not the ideal neutral venue too often, but obviously hosting our own championship games is a big deal to us, and there is plenty of underage activity here. The ladies’ club is new on the scene but they’re going well and making great progress, so we’re all delighted with that and it’s great to be able to facilitate them too.

“We have had some memorable occasions. Donegal were here the year after they won the All-Ireland and Kerry came up for a game too, so Kilronan Park has hosted some great players down the years,” he recalled.

He can acknowledge however that when it comes to the future, there’s a lot of work to be done to ensure St. Ronan’s GAA Club doesn’t go the same way as the local mines.

“Obviously it’s ideal if you can stand alone as a club, but that’s not easy for any small rural area, and there are lots of clubs that will find it difficult.

“Amalgamation is something that we’ll have to think about, it’s a discussion that’s come up before and I’m sure it will again in the next year or two. There are too many people around here who have put their heart and soul into St. Ronan’s for too long, and whatever it takes to keep Kilronan Park open and full of activity, that’s what we’ll do,” he concluded.