Joe ‘Moore’ positive than ever about St. Aidan’s prospects 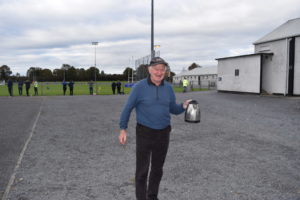 It’s the well-worn path that most GAA people travel — underage player, then adult player, then coach, then administrator. For a lot of people these roles can overlap very briefly. For some, like Joe Moore of St. Aidan’s, they can overlap for decades.

Not unlike their neighbours from Pádraig Pearses, it wasn’t until the 1960s that St. Aidan’s GAA Club was properly established. Though founded in 1956, it took time for the various corners of the parish to gel together.

At 15 years of age, Joe played adult championship for St. Aidan’s in 1959, but the club didn’t field a team again until 1963, his first year out of minor. By then, he was club secretary, and involved in running the team as well.

“I wouldn’t call myself a coach, more of a gatherer!,” he quipped.

“Back then it was just about gathering players for match days, maybe bringing even a few on the bike! We just wanted to get teams on the field, and off the field we had work to do too. I was appointed secretary at my very first meeting, and I ended up doing that job for a long time.

“I remember that when we lined out in 1963, we were wearing jerseys that had been bought in 1945 for the club team in Dysart, so it was definitely starting from a low point!

“It wasn’t easy, because there was a football team in Four Roads at the time. There had been a row between the hurling board and Four Roads over a very serious injury to Eamon Coyle on the field in a match and how he was treated. He was effectively left for dead, people thought he wasn’t going to make it, though thankfully he did. His boots and jersey from that day are still in Coyle’s pub in Four Roads.

“What that meant is that there was another football club in the parish, so it wasn’t easy get things going,” he recalled.

Things started to come together relatively quickly. The bones of Joe’s 1962 minor team stuck together, aided by a handful of older players, and a junior championship win in 1966, with Moore lining out at right half-forward, proved to be a vital stepping stone in cementing the whole operation.

“Speaking over 50 years later, and I’d still say that’s the highlight of my time in the club. Obviously, it was great to win a championship medal, but it meant that the club was established, and everything we’ve done since has been built on that security.”

As a club, St. Aidan’s has added four intermediate championship wins to that 1966 Junior A success, and Joe has been there throughout in a variety of roles, while also refereeing for good measure. He took charge of the 1975 county senior final and replay between Roscommon Gaels and Castlerea St. Kevin’s, and is still heavily involved to this day, both as club president and as part of the parks committee.

“I can honestly say I’ve never been as positive about things in the club as I am now,” he highlighted.

“There’s so much happening on and off the field, there’s plenty of talent there and the lads are responding well to Georgie (Digan, manager) and standards are rising.

“We have lots of sports in our parish and that’s fantastic. The way I see it, if Four Roads Hurling Club or Dysart Soccer Club raise their standards, that’s going to attract players, and that in turn will force St. Aidan’s to do the same. All across the country now, standards are higher than they’ve even been and it’s great to see it,” he concluded.

Some might say modern players are standing on the shoulders of giants, and those giants are men like Joe Moore.