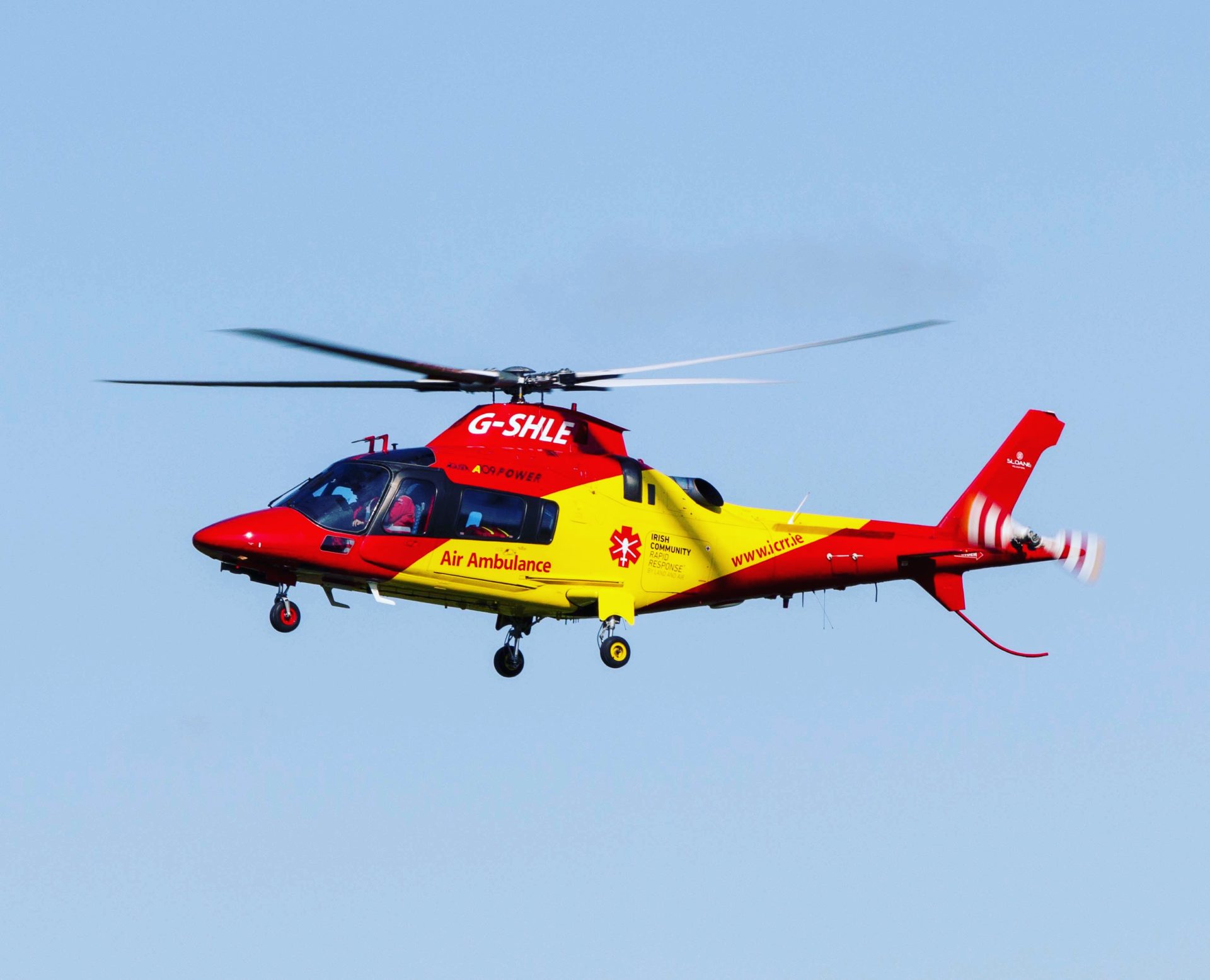 Roscommon was one of 13 counties where the Irish Community Rapid Response Air Ambulance (ICRR) operated in last year. The ICRR was tasked to respond to 490 incidents across 13 counties during 2020, which was its first full year in operation.

The ICRR Air Ambulance, based in Rathcoole in County Cork, works in tandem with the National Ambulance Service to provide both paramedic support and transport to hospital for seriously ill patients.

Figures from the ICRR show that July was the single busiest month, with the Air Ambulance being tasked a total of 59 times. Road traffic accidents account for the most incidents, with a total of 94 taskings throughout the year.

Amongst the other incidents responded to were 81 cardiac arrests,74 general trauma calls, 73 general medical calls, 46 farming accidents, and 29 falls from heights. Cork, Kerry and Waterford were the counties most likely to require the service.

ICRR Chief Executive Mícheál Sheridan said the statistics show the demand that exists for an Air Ambulance based in the south of the country.

“The ICRR Air Ambulance is airborne in under four minutes of being tasked by the National Ambulance Service, and is thirty minutes away from most of the areas within its catchment. Dozens of lives have been saved as a result of the hard work of the crew, and care administered in a timely manner to hundreds of others. Ireland needs this service, and this service needs the continuing support of our community fundraisers and corporate supporters”.

“Our dispatch teams have the option of either the Air Corps service from Tullamore or the ICRR service from North Munster,” he said. “This provides much needed and timely support to our on-road response teams operating across the country. Equally, the provision of these services ensures that critically ill patients can be brought to emergency trauma centres faster, which improves the likelihood of a successful outcome.”

The ICRR Air Ambulance currently has two helicopters at its medical aerodrome in Rathcoole, County Cork, only one of which is operational at any one time, the other acting as a backup.  A new faster helicopter with a longer range capacity is due to be delivered later in the year.

Mr Sheridan added that a priority for the ICRR in 2021 was to work with other partners to ensure everyone on the island of Ireland is within 30 minutes of an air ambulance service.

ICRR recently launched its new ‘Further Faster’ campaign to help raise the €1.5 million needed this year to fund the service and its new Air Ambulance helicopter. The appeal started with our 310,000 steps challenge ‘Marching Through March’ where the public and companies are asked to participate in the challenge and to fundraise.

For more information on the fundraiser please visit www.icrr.ie.