O’Rourke off to a flyer in Sofia 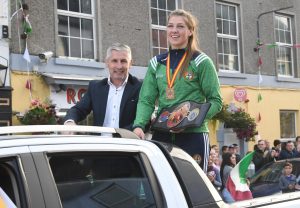 Aoife O’Rourke has got her Strandja Multi-Nations bid off to the perfect start in Bulgaria this morning.

The Castlerea boxer stopped her Bulgarian opponent Dobromiro Georgieve in the second round of their last 16 bout after a dominant display.

The European champion was always on the front foot, and the referee stopped the contest after giving her Bulgarian opponent a number of standing counts.

O’Rourke will return to the ring on Thursday for the quarter-finals.

The Strandja Multi-Nations tournament in Sofia marks Team Ireland’s first official outing since last year’s European Olympic qualifiers, which were cancelled on March 16th after three days of competition in London because of the Covid-19 pandemic.