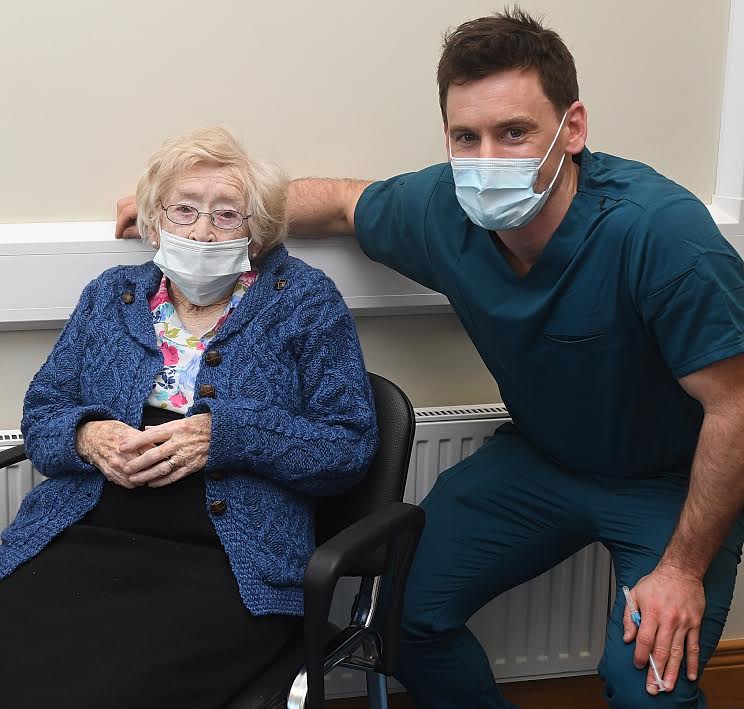 It was a family affair for 98-year-old Christine Harrison who received her first dose of Pfizer BioNTech vaccine today at the Roscommon Primary Care Centre.

Christine, who will be 99 years young in October, received her first vaccine from her grandson, Dr. David Harrison at the Roscommon Primary Care Centre earlier this afternoon.

The mother of five, who resides with her daughter Helen in Kiltoom is also the grandmother of twelve children and 19 great-grandchildren. Speaking after receiving her first vaccine she said she “had been looking forward to the day” and said an active lifestyle is a major factor in her long years of health.

Dr. Harrison, who is one of two doctors based at the Centre, administered the Pfizer vaccine. A total of one hundred patients over 85 years are due to get the vaccine today and tomorrow (Friday).

A native of Ballyleague, Dr. Harrison was supported in the vaccine roll-out by colleague Dr. Valerie Morris and two nurses Mary Kelly and Jackie Holmes. After getting her first vaccine, Christine will return for her second in a month’s time on March 25th.

Christine was accompanied by her daughters Helen, who she resides with in Kiltoom and another daughter Mary who both described their mother as “a very positive individual who keeps herself busy and always looks on the bright side of life” citing knitting as one of her life’s passions.

Delivery of the vaccine took place earlier this morning. Those receiving the vaccine came from Roscommon town and a ten mile radius of the town.

Speaking after administering the vaccine to his grandmother, Dr. Harrison described the day “as an exciting day” adding: “it is good to be able to do something.” All patients were monitored for fifteen minutes after receiving the vaccine as a precautionary exercise, however no issues have been reported.