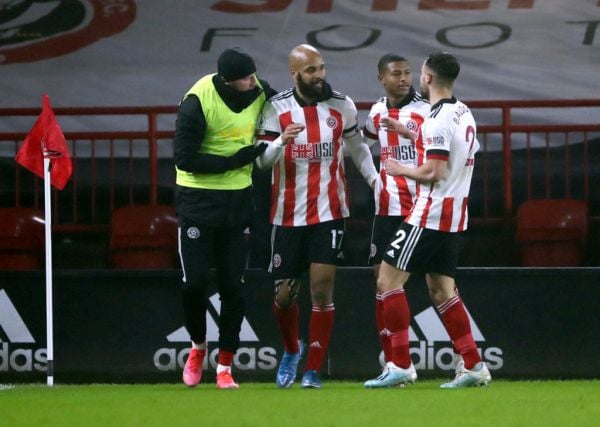 Sheffield United showed there is fight left in them yet after battling with 10 men for more than half an hour to win 1-0 against Aston Villa.

David McGoldrick’s first-half goal put the bottom-of-the-table Blades in front but they faced an uphill task to hang on to that lead when Phil Jagielka was sent off early in the second half.

But the remaining 10 Blades stood firm and defended solidly and will feel they have kept alive their faint hopes of pulling off the greatest of escapes.

It would still take a brave person to bet against Chris Wilder’s side being relegated, with a 12-point chasm left to bridge in the remaining 11 matches.

What a result, Bladesmen. 👏 pic.twitter.com/L8urlgLNnb

Villa, meanwhile, still harbour hopes of European qualification but must show they are capable of winning without captain Jack Grealish, absent again at Bramall Lane with a lower leg injury, if those ambitions are to be realised.

The visitors started well. Ollie Watkins headed the ball into the path of John McGinn after Bertrand Traore’s shot had looped up in the air off a defender, but McGinn’s strike from the right side of the six-yard box flew back across goal and narrowly wide of the far post.

Anwar El Ghazi led a Villa break and sent Watkins free down the left side of the penalty area but Aaron Ramsdale was equal to his shot, making a fine save.

Watkins wanted a penalty shortly afterwards when he went down under pressure from Kean Bryan and Phil Jagielka. It looked like there was no attempt to play the ball by either Blades defender, but referee Robert Jones was not interested in the appeals.

Traore was unable to direct his effort on target from another Watkins knock down.

McGoldrick put the Blades in front after 31 minutes when he turned home George Baldock’s driven cross-shot, sticking out his leg to divert the ball into the net via the underside of the crossbar.

Traore almost equalised immediately with what would have been a goal of the season contender. It was his own work, weaving through Oliver Norwood, Jagielka and Ethan Ampadu before curling a left-foot shot just a yard wide of the post.

Club-record signing Rhian Brewster sent a first-time shot straight at Villa goalkeeper Emiliano Martinez as he toiled for his first goal since his arrival at Bramall Lane at the start of October.

Watkins crashed a header off the crossbar before the hosts were reduced to 10 men after 55 minutes after Phil Jagielka brought down El Ghazi.

Referee Robert Jones initially only issued Jagielka with a yellow card but, after being advised to take a look at the incident on the pitchside monitor, the official changed his decision to a red card and sent off the Blades defender.

It could turn out to be another controversial VAR decision as it is up for debate whether El Ghazi would have been away through on goal as Kean Bryan was trying his best to cover for Jagielka.

From the resulting free-kick, Ramsdale made a fine save to keep out McGinn’s driven shot.

Villa had around half an hour to rescue something against 10 men and they laid siege to the Blades goal. Traore saw a goalbound effort bravely blocked by Ampadu before Tyrone Mings headed over from the following corner.

The visitors needed more creativity and Dean Smith sent for Morgan Sanson and Ross Barkley for the last 20 minutes.

Traore saw another strike blocked by Ampadu but Villa’s best chance to salvage a point fell to Ezri Konsa in injury time, but he was denied at point-blank range by a superb save from Ramsdale.