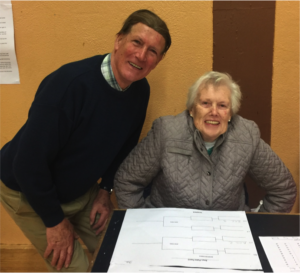 The GAA has released a fitting tribute to Michael and Anne Naughton who received their President’s Awards last weekend.

Two of the county’s most well-known and respected handball personalities and members of St. Coman’s Handball Club, Michael and Anne have coached some of the greatest handballers County Roscommon has ever produced.

“We were very, very lucky in that we had good players, both boys and girls. Eventually, then we went into competitions in a big way. We won All-Irelands and we eventually ended up going to the United States where we won several titles,” said Michael.

Ann spoke about her role as assistant manager to the Irish team at World Championships.

“We enjoyed it. I wouldn’t change a thing. I only wish that I could keep going further,” she said.

Michael and Anne were presented with their medals by their granddaughter Ciara.

Michael and Ann Naughton have served their club, county and province in a coaching and administrative capacity since 1980. Both have been lifelong devotees to @GAA_Handball and have given a lifetime of invaluable service. Congratulations on your #GAA President’s Awards @SportTG4 pic.twitter.com/cOsGXF7uCx