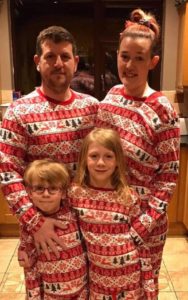 Niall Cullen with his wife Sarah and their two children Eli and Sebastian.

A Dublin native who has been living in South Roscommon for the last 13 years will aim to complete the ultimate endurance test this weekend when he runs the David Goggins 4 x 4 x 48 challenge, starting on March 6th.

Niall Cullen, who is son-in-law of former Clann na nGael player and current Roscommon U-17 manager Emmet Durney, will commence his challenge on Saturday morning next at 4 a.m. and hopes to finish in the early hours of Monday morning.

The challenge tasks participants to run four miles every four hours for 48 hours, so Niall is aiming to complete the gruelling task at approximately 12.40 a.m. on Sunday night/Monday morning.

“I have a few routes planned from the house — two miles out and two miles back — so I’ll be well within the current 5 kilometres restrictions,” Niall told the Roscommon Herald on Thursday.

Niall is married to Sarah (nee Durney) and they have two children, Sebastian (10) and Eli (7). They live in Cornafulla, Athlone.

Niall is raising money for the BUMBLEance Children’s National Ambulance Service, the world’s first interactive ambulance purposefully designed for children, with the capacity to operate the latest medical equipment and inter-hospital communications systems.

In January 2018, Niall and Sarah’s eldest son Sebastian contracted the Influenza B virus and required the BUMBLEance service to make the journey from Portiuncula Hospital in Ballinasloe to the Crumlin Children’s Hospital.

“Sebastian had a temperature one night. Sarah went in to check on him and gave him Calpol. She checked on him again half an hour later and he was borderline in a coma. His temperature had come right down to around 32c. It went from one extreme to the other so quickly.

“We rushed him to Portiuncula and the decision was made that he needed to go to Crumlin. It was touch and go for a few days. We nearly lost him,” admitted Niall.

The professionalism of the BUMBLEance service was widely lauded by Niall who pointed out that it depended on public funding for support.

“It’s just a brilliance service. They organised everything. The Head of the Paediatric Unit in Temple Street and Crumlin came down with another nurse, and there was a driver. Everything was on board the ambulance in case we needed it,” highlighted Niall.

Niall, originally from Cabra and who works with Bus Eireann, is no stranger to endurance running. He has completed six marathons in the last four years. When lockdown commenced last March, he ran a half-marathon by completing 524 laps around his house in Cornafulla!