It’s ‘a wild dream to win at Cheltenham’ 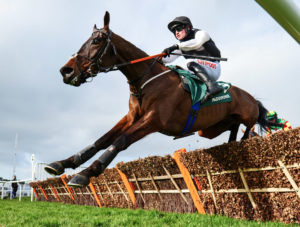 Flooring Porter and Danny Mullins on their way to winning the Stayers Hurdle in Cheltenham on Thursday. Picture: INPHO/Mark Cranham

It may be a long way from Creagh to Cheltenham, but for the owners of Flooring Porter the journey ended in glory on Thursday afternoon.

Joy unconfirmed was the order of the day as the horse crushed his rivals to win the three-mile Stayers Hurdle at Prestbury Park — the big race on day three of the festival.

Trained by Gavin Cromwell, the horse is owned by a syndicate, which includes father and son Tommy and Alan Sweeney from Creagh, South Roscommon, former owners of the Country Man Inn pub in the village nestled in the heart of Padraig Pearses GAA country.

The horse which runs in the distinctive black and white silks of the ‘Flooring Porter’ syndicate, is also part-owned by Alan’s uncle Kerril Creaven and his friend Edward Hogarty, both from Killimordaly over the Galway border.

Returned at 12/1, Flooring Porter led from the off in a pillar to post success, storming up the Cheltenham hill to leave his rivals in his wake. The horse won in a similar fashion in the Grade 1 Christmas Hurdle at Leopardstown and that day returned at 11/1 after winning at Navan three weeks previously.

Speaking to the Roscommon Herald in the immediate aftermath of the race, a delighted Alan Sweeney said it was “a wild dream to win at Cheltenham” after he watched his horse storm to a five-length victory.

“There’s great excitement here at home in Creagh. Jonathan Moore (Flooring Porter’s regular jockey) deserves everything and all the credit. Sadly, he had to stand down from the ride this morning after sustaining an injury.  He recommended we book Danny Mullins for the ride.

“I’ve been on the phone to my father, my uncle and to Ed and there are all so excited. Because of the restrictions, we’ll have to wait before we have a proper celebration, possibly in trainer Gavin Cromwell’s yard.”

Alan bought the horse as an unbroken three-year-old for €5,000 from Gavin Cromwell. The six-year-old has shown incremental progress in each of his fourteen outings to date, earning €127,211 in prizemoney up to today’s big race.

Flooring Porter is bred to stay — he’s out of Yates, an Ascot Gold Cup winner and Lilymile, who currently is with Seán Murphy in Monivea, the dam’s breeder. For Alan, a member of many successful Padraig Pearses hurling teams, today’s victory is at least equal to any success on the field of play.

“We (the owners) all had a few bob on him the past six weeks. My father was involved with Essex, which ran in the Champion Hurdle a few years ago. We’ll leave it to Gavin as to what the next plans are for the horse — we may go to Punchestown or he might be put away for the season.

“We had a feeling he’d run a big race today. He stays all day and the only way he was going to be stopped was at the wall after the finishing post,” said an ecstatic Alan in one of the great moments in Roscommon sport, echoing Montelado’s success, also on day three of Cheltenham, 29 years ago.