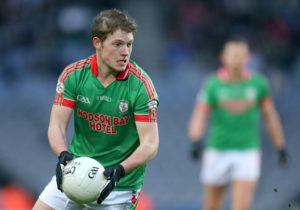 Cathal McHugh is part of the syndicate that owns Skyace who finished fourth at Cheltenham on Thursday.

Ridden by Donie McGarvey, the John ‘Shark’ Hanlon trained six-year-old was prominent throughout and stayed on well to finish fourth in a competitive race won by the appropriately named ‘Telmesomethinggirl’ ridden by Rachel Blackmore, who was enjoying her fifth Cheltenham success of the week.

Like others, Cathal and his friends were watching from afar, in this case, Victor’s Bar in Abu Dhabi in the United Arab Emirates, where he lives with his wife Aoife from Lanesboro. He is a teacher of Social Studies and Business at the Westshells Academy and is on a career break from Roscommon Community College where he is also a teacher.

Cathal is one of the six-strong ‘Birdinthehand’ syndicate who own the six-year-old, which is sired by Westerner. The horse was returned at the enticing odds of 28/1 representing a good investment for each way backers despite carrying top weight of eleven stone, seven pounds.

Cathal and his friend Kevin Quaine from Wexford picked up ‘Skyace’ for the bargain fee of €600 in November 2019 after being told the horse would make €10,000 at sale. Prior to today, the horse had been placed in three bumpers.

Connections claim that assuming the horse comes out of today’s race well, she may be entered for a Grade One in Fairyhouse in Easter and possibly Punchestown with potential plans also for the horse to race in France.