Roscommon man part of Republic of Ireland entourage in Belgrade 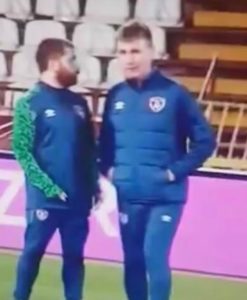 The Republic of Ireland may have suffered a defeat in their opening World Cup qualifying game against Serbia on Wednesday night, but there were plenty of positives for manager Stephen Kenny to take from the 3-2 defeat in Belgrade.

For Castlerea native Seán McDonnell, he certainly played his part.

Seán is the International Operations Senior Men’s Team Co-ordinator, having been recruited as part of Kenny’s staff when the former Dundalk boss took over from Mick McCarthy.

Son of Pat and Mary McDonnell, Cloonard, Castlerea, Seán is a former Loughglynn United player and has worked with the FAI as an administrator with different underage teams, including alongside Kenny at U-21 level.

“He essentially does all the planning for the team beforehand to make sure everything is in order for when the team report for international duty. Seán looks after everything — from flights to hotels, from transport to training facilities, from toothpaste to football boots. It’s essentially all the logistics surrounding a particular game,” Seán’s father Pat told the Roscommon Herald on Thursday.

“He’s a vital cog in the wheel and we’re very proud of him. Obviously, Stephen trusts him, but he has always loved soccer and sport in general. He’s a very quiet, unassuming person, and is happy to go about his work diligently in the background away from the limelight.

“I was chatting to him briefly when the team landed back from Belgrade. Everything went fine, apart from the result. But the team played well and they’re a very happy, united camp. Hopefully, they’ll get the win against Luxembourg on Saturday evening,” concluded Pat.