Padraig’s devotion to Athleague rewarded on and off the pitch 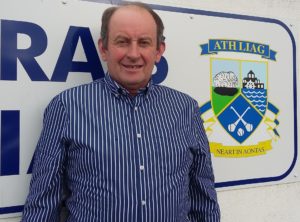 Padraig Moran is a wonderful ambassador for Athleague Hurling Club.

With the country tuned into Cheltenham recently, one of the most remarkable statistics in the world of sport got trotted out on a couple of occasions.

The achievements of Yeats, Stowaway and Jeremy — the three leading sires of the week — didn’t quite get the same air as those of Rachael Blackmore and Henry de Bromhead, but it did bring some attention to the aspect of breeding.

Incredibly, every thoroughbred horse currently on the register can be traced back to one of 28 sires back in the 18th and 19th century, and in modern research would actually suggest that in 95 per cent of modern racehorses, the Y-chromosome can be traced back to a single stallion — the Darley Arabian, born in 1700.

When it comes to hurling in Roscommon, there mightn’t be the same genetic aspect, but when you talk to key stalwarts across the county, one name crops up far more often than most as a key influence — Johnny Haughey.

As a neighbour of Roscommon hurling’s own ‘Darley Arabian’, Padraig Moran of Athleague was always likely to get involved in the sport and the Athleague club, and that’s exactly how it happened.

“I played underage all right but never played senior,” he recalled, before explaining how Johnny Haughey wasn’t going to let his talents go to waste all the same.

“Second Mass in Athleague was at 10.30 a.m. and after that, Johnny might come looking for someone to help out with lining the pitch, putting out flags, whatever was needed. Back then, there were only push mowers so even after the grass was cut, you’d have to go around and rake up all the grass as well.

“I certainly had the interest. I was only a young lad in the late seventies, when Athleague and Tremane hurled against each other in four county finals between 1976 and 1980. With two clubs in the one parish, you can imagine how much interest there was around the place at those times, and naturally you’d get swept up in it all,” he reflected.

Living in a house where, as Padraig says himself, what club you fell into “would depend on what side you got out of the bed”, Padraig’s devotion to Athleague went unrewarded by club silverware for a quarter of a century. A one-point win in the 1978 county final against Tremane turned out to be the last championship success for the club for 25 years, until that remarkable famine ended in 2003.

“You’d be going around picking up the flags after county finals in Athleague, watching as the winners celebrate, and you’d wonder if it was ever going to be our turn. But then, when you’ve known the bad days, they make the good days all the sweeter, and 2003 was an incredible day. The team played so well as a group, it was a great performance and it probably was one of the happiest days I’ve had in the club,” he remembered.

“You certainly didn’t mind sweeping out the dressing rooms that Monday,” he continued.

Of course, Padraig being Padraig, he was never going to be able to just sit back and enjoy the game.

“That day, Johnny had a different job for me, he had me selling programmes, so I’d say I missed the first 15 or 20 minutes!”.

To pigeonhole Padraig’s work with Athleague as just helping out with the pitch is of course a dramatic understatement. He was club PRO for decades, winning Roscommon GAA PRO of the Year in 1994. He also served as the club’s hurling board delegate, not to mention plenty of time spent in coaching and selecting roles.

Yet there’s no doubt that for the majority of people that have attended big games at Waldron Park for the last four decades, Padraig will always be the man on the ground, a vital part of the effort to make sure that the traditional home of hurling in the county is perfectly turned out, and ready for action.