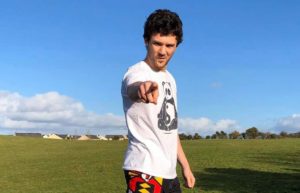 An emerging County Roscommon artist has articulated his thoughts on major global issues through the release of his debut EP.

Aliens — the first official musical release by 29-year-old Boyle native Adam Millett — has been available on all major platforms since March 26th.

Son of Brian and Marie Millett and a former student of Abbey Community College, Adam penned the six songs over a six-week period last November and December.

“I enjoyed every moment of it. I wrote the first song “The Human” and I realised there was a bigger story to tell. So it was a case of linking one song to the next one. Just to be able to put all those ideas in one place freed up a lot of space in my head,” Adam told the Herald.

Adam, who performs as Adam Cats, has pledged to donate all proceeds from the EP to organisations fighting to tackle wealth inequality and the climate crisis.

A well-balanced blend of spacey backing tracks and intricate, free-flowing vocals helps to deliver an honest account of the artist’s thoughts about these major issues, followed by a hopeful message about how humanity can come together to build a better world for everyone.

“I studied a post-grad in sustainability marketing at DCU and then I did some travelling to places like San Francisco, The Netherlands and Cambodia. I have always been interested in environmental issues, so I set up Word Chameleon where I help businesses share their sustainability stories with the world.

“I also set up my own blog — A Wall of Hope — which contains uplifting stories that gives me confidence that there’s a better future for all of us. There’s too much doom and gloom in the world these days,” he explained.

After writing poetry for years about topics like climate change, inequality, self-love, and other societal issues and metaphysical reflections, Adam decided to start out on his journey as a recording artist.

The response to his debut EP has been extremely positive, which has allowed Adam to explore other avenues to express his wide-ranging thoughts about the world.

“The genre of the EP is probably somewhere between spoken word and rap, and through the six songs I tell a kind of ongoing story about my thoughts regarding the state of the world, followed by a hopeful idea about how we could build a better one.

“I’m trying to spread the word about it a little as I think there’s an important message in the EP that might resonate with plenty of folks. The response to the EP so far has been very heartening,” he said.

Aliens, by Adam Cats, is available on Spotify, Bandcamp and Soundcloud.