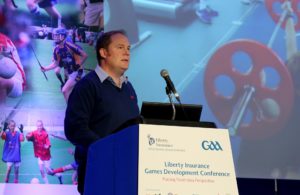 Des Ryan is the new Director of Coaching and Performance at Setanta College.

A former Roscommon GAA coach is to leave his role as Arsenal’s Head of Academy Sports Medicine and Athletic Development to become the new Director of Coaching and Performance at Setanta College.

Des Ryan, a native of Aughrim, outside Ballinasloe, was strength and conditioning coach for the Roscommon senior footballers in 2001 when they won the Connacht title under manager John Tobin.

In February 2013, he joined the Gunners and has worked with promising young athletes, particularly at the Arsenal Academy with former player Per Mertesacker.

Writing on LinkedIn over the weekend, Ryan said: “Really looking forward to working full time with some great people who I admire and respect in Setanta College.

“I’m really looking forward to moving back to Ireland and seeing family and friends more often.”

Setanta College is an online college specialising in the delivery of strength and conditioning studies.

The college posted: “Des is one of the leading youth coaches and performance managers in sport and a world-renowned practitioner and speaker in the field of youth athletic development.

“In joining Setanta College, Des will help us to continue providing the highest level of education to our students.”

In December 2020, Ryan spoke to the Roscommon Herald and fondly recalled his time with the county’s senior footballers 20 years ago.

“I think of players like Gary Cox, Seamus O’Neill, Nigel Dineen — these guys could easily have been professional athletes in a lot of other sports. Paul Noone was one of the fastest sports people I’ve worked with, Frankie Dolan was certainly have been capable of playing at a very high level in soccer and I’d have loved to have seen Francie Grehan playing as a rugby centre, crashing through tackles.”

Roscommon won a Connacht title in 2001 and followed that up with another All-Ireland quarter-final appearance in 2003, not to mention a hard-fought battle with Dublin in a round four qualifier in 2004. Competing with the best teams in Ireland was no issue for that group, or several more in a time when several counties were able to take on the best in Ireland.

Some people felt that even more might have been possible for Tobin and his players, but for a storm of off-field controversy that, in Ryan’s view, unfairly derailed the group, albeit mainly in 2002.

“I think back to that time and I feel that the events that got that group in trouble weren’t unusual for elite sports teams, it was just unusual that they were aired in public. Mistakes were made, yes, but the fallout was severe, and they were definitely very harshly treated,” he felt.