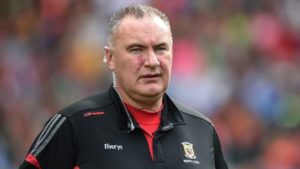 Browne managed the Dublin camogie team in 2019, two years after guiding the Mayo ladies’ footballers to an All-Ireland final defeat to the Dubs. He was ratified as Roscommon junior camogie manager over a week ago.

Browne didn’t pull his punches and said the episode amounted to “two fingers” to people who are observing guidelines and missing out on events like funerals.

“There’s almost a kind of an arrogance, ‘Well, we’re the Dublin footballers, we can actually do what we want anyway’,” said Browne.

“On the other hand, they’re talking out both sides of their mouths, ‘Come on, stay safe everybody and do this but we’re okay, we’re just going to slip down to the pitch at 7 o’clock (in the morning) when no-one is looking — we think — and play a bit of football’.

“I think it was just badly advised, badly judged and I think it’s a cop out to say they’re amateur players. We’re all amateur players involved in the GAA, we all know right from wrong, and it was wrong.

“In my opinion, it was wrong on every single level. I see some of the stuff going around on social media with Dublin supporters kind of saying, ‘It’s against the Dubs’ and all this kind of thing. That’s absolute rubbish. They done wrong.

“Dessie has been suspended, I personally think, and I have brilliant time for Dessie, he did huge work, and huge work with the GPA, but I think Dessie probably should have put up his hand and said, ‘Look, I’ve made a bad call here and I’m actually going to step down as manager’.”

News of the rules break emerged on Thursday morning and just hours later the Dublin County Board handed down the three-month ban for Farrell.

“I’d love to see behind the scenes how much pressure was put on from sponsors,” said Browne.

“I’d say it was, ‘Kill this story and kill it quick guys because the longer this is going to rumble on the worse it’s going to get’. I’d imagine there were some fairly frantic phone calls going on. But then the GAA club (Inishfails) as well has to be called into question, they were using their pitch and their facilities,” he felt.