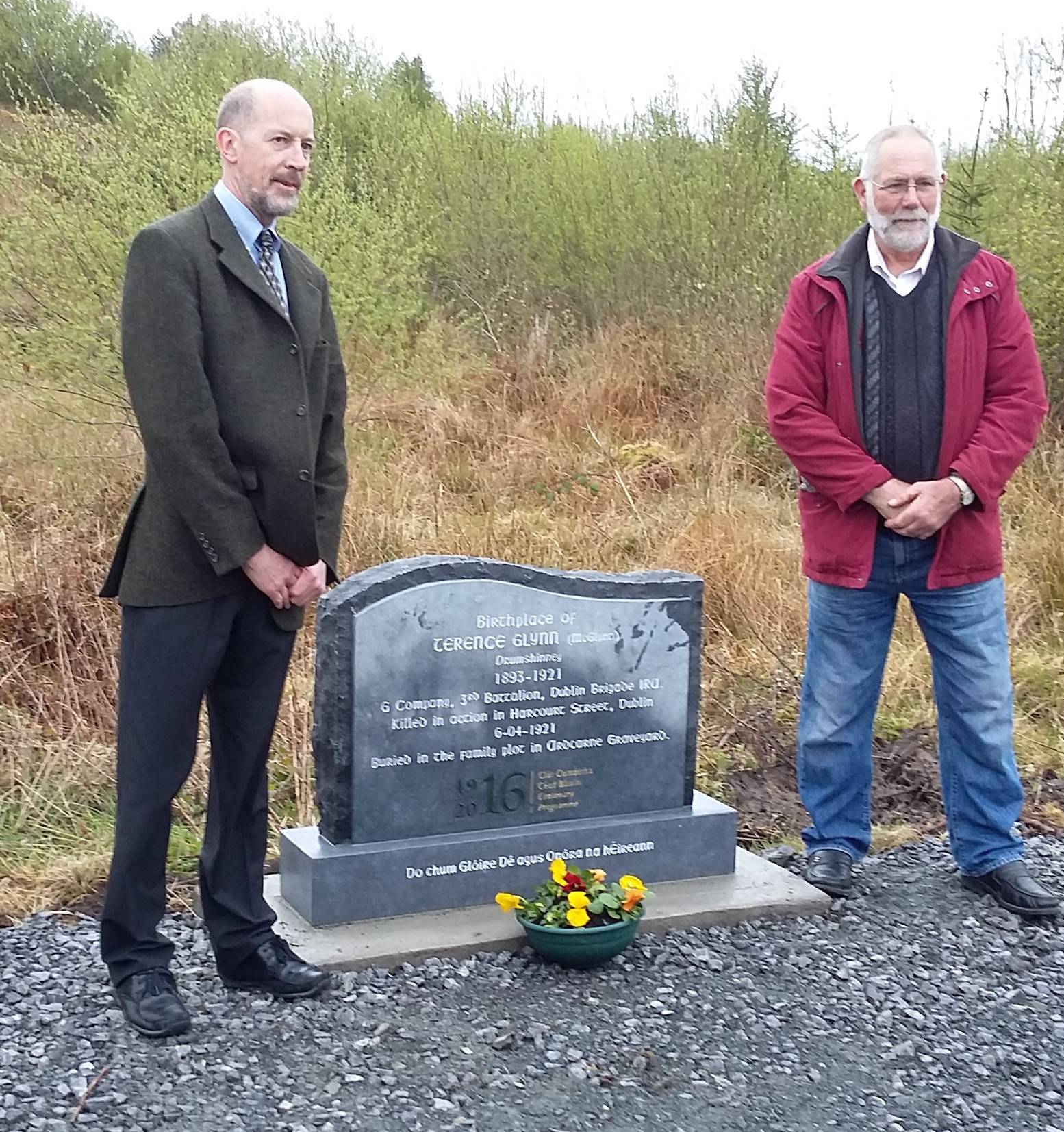 Terence Glynn (Mc Glynn) was killed in action during the War of Independence on April 6, 1921. Terence was a native of Cootehall, the seventh son in a family of nine children born to Thomas Glynn and Elizabeth Logan, Drumshinney/Derrygirraun, Cootehall. Terence was a grocer’s assistant, he had worked in King’s of Ballyfarnon (now Shivnan’s), in Harold’s of Longford, in Lynch and O’Brien’s of Dun Laoghaire and, prior to his death, he was manager of Thomas Hogan’s, Grocery and Bar, Dame Street, Dublin.

Terence and Paddy Moran (executed on March 14, 1921) were both natives of the Ardcarne Parish, they were good friends and followed a similar path in their early lives. Both were grocer’s assistants, members of Conradh na Gaeilge, active members of the IRA, and both worked at different times in the same premises in Dun Laoghaire.

Terence’s younger brother, James, was involved with Paddy Moran in organising trade union activities in Dun Laoghaire up to the time of Paddy’s execution. They were imprisoned in Mountjoy for two weeks in January 1920, during the Barmen’s strike, for preventing the unloading of a consignment of porter at Thomas Brady’s pub. They could have paid a fine but wouldn’t on principle saying they had done no moral wrong.

Terence was a member of G Company, 3rd Battalion, Dublin Brigade IRA. On Wednesday, April 6, 1921, he and Daniel Carew, a native of Annacarthy, Co Tipperary, were involved in an attack on a lorry carrying Crown Forces in Harcourt Street and both lost their lives. The official report from the Military Court of Inquiry held on April 11, 1921, stated that Terence Mc Glynn died near Harcourt Street Station from shock and haemorrhage caused by bullet wounds inflicted by a patrol of the 2nd Battalion, The Worcestershire Regiment, in the execution of their duty.

The house surgeon at the Meath Hospital gave evidence to the Inquiry. He said that the deceased was brought to the hospital at 8.30pm on the evening of April 6. He described the multiple gunshot wounds on the body, one penetrated from his neck to his brain, his right shoulder blade was shattered, a bullet penetrated his left thigh and lodged in his buttock, there were about 10 other superficial wounds around the back shoulder area and he removed several bullets and pieces of metal from the body.

At the time of his death, Terence was 28 years old, he was born on February 28, 1893. His family name in the civil register is Glynn and his townland is given as Derrygirraun. In Dublin he seems to have been known as McGlynn possibly because, as a member of Conradh na Gaeilge, he used the Irish form of his surname which would account for the addition of Mac/Mc to his surname.

Terence’s body was returned to his family and according to the Herald article “a very large funeral accompanied his remains to their last resting place in Ardcarne Graveyard.” He is buried in the family plot in the older section of the Graveyard. He is remembered along with Paddy Moran and others on the memorial plague erected to honour the Grocers’ Assistants in their Union Headquarters in Banba Hall, Parnell Square. Dublin.

In 2016, the Ardcarne Remembers Centenary Committee erected a memorial stone in his memory close to his birthplace.