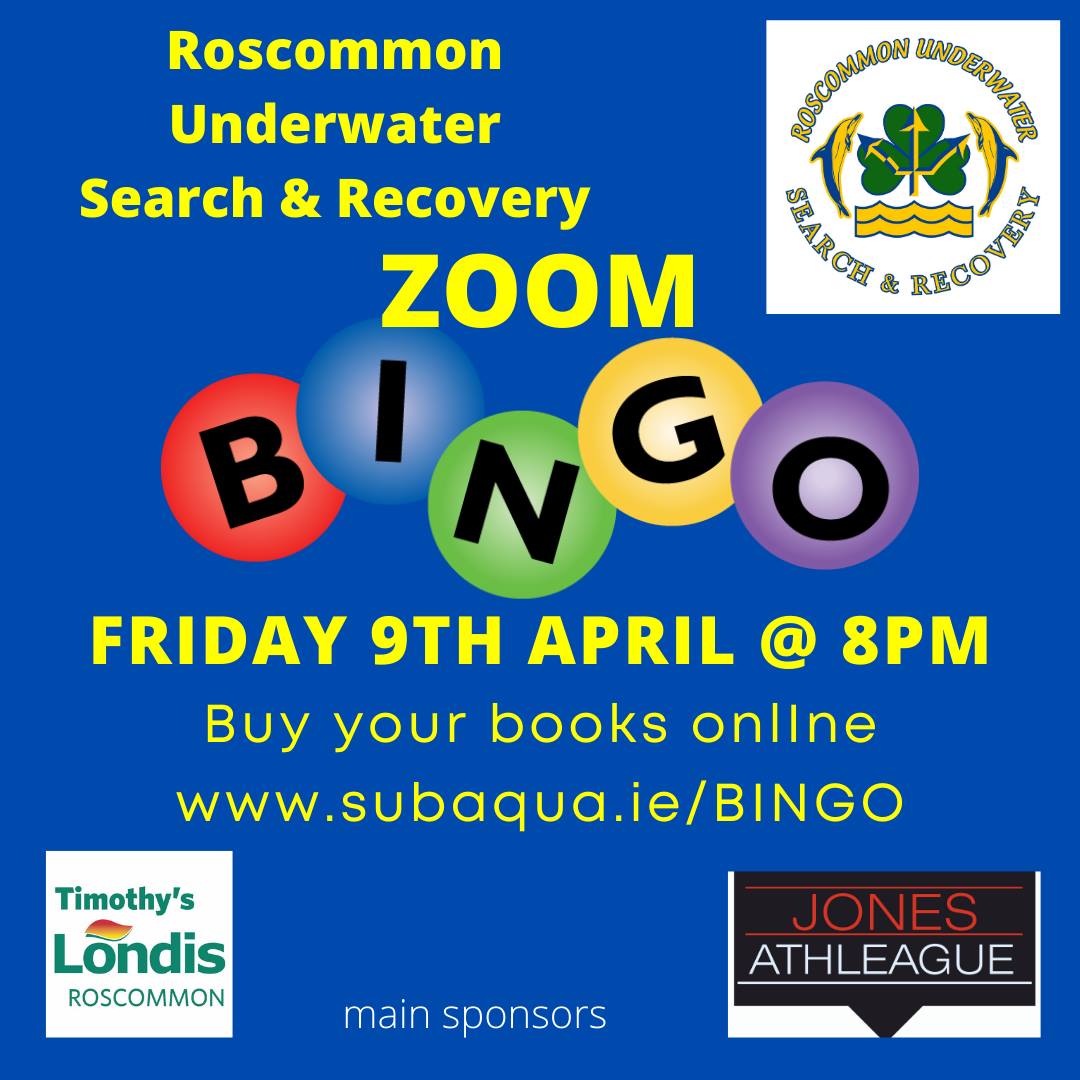 Members of Roscommon Sub-Aqua Club have been facing the uncertain waves of Covid-19 with renewed focus. The club continues to provide a search and underwater recovery service since the club’s formation 36 years ago.

Formed in 1984 as the Dolphin Sub-Aqua Club, later becoming the Roscommon Sub Aqua Club was established when a group of five divers decided to form a Sub Aqua / Underwater Search and Recovery Unit to serve the community.

As part of a co-ordinated team, working with the Lough Ree Coastguard, the Garda Sub Aqua Unit and other emergency personnel, the club takes a very active part in the many Search and Recovery operations in the area.

Thankfully the privations of Covid-19 have meant fewer incidents in the past twelve months. However efforts to meet the operating costs of the club have been frustrated by their inability to hold their annual bucket and Church Gate collections, which meet the running costs of the club.

Despite that, the club have organised a new initiative, online bingo, as a means of generating funds on their webpage www.subaqua.ie/bingo. Tickets to participate are €10 with the event night scheduled to begin on April 9th.

PRO of the Roscommon Sub-Aqua Club is Martin Dowd. He says that to date, there has been great interest in the initiative, which will initially be run on a monthly basis. “We usually run our fundraising events at the end and start of every year, but haven’t been able to do so this year.

“It costs approximately €30,000 to run the club annually. Those running costs are primarily for insurance, fuel, maintenance and the repair of boats and equipment. Last year, the club was able to finance a new boat, thanks to the generosity of the family of the late Robert Brady from Ballinagare, who raised €7,000 through a fundraising event, matched by 80% Clár funding.

The new boat, measuring 3.2 metres is a smaller boat that can be used by the club on river searches and smaller waterways where their other larger 7.5 metre boat would not be navigable for searches on narrower rivers or waterways.

“We’re also trying to develop our clubhouse on the racecourse road in Roscommon which in the past we received LEADER funding and the Roscommon Municipal Authority to meet the costs of an extra meeting room and clubhouse. We’ve recently applied a non-slip coating on our flooring which had up to then, being quite slippery” says Martin.

Despite activity being quieter than usual, members of Roscommon Sub-Aqua Club are ready and have answered the call to respond to emergencies in recent months: “some of our members were involved in a rescue mission in Galway a few weeks ago. We were also involved in a number of searches last year.

“Because of a lack of activity owing to Covid-19, we’ve been to less call-outs and accidents. When restrictions lift and with the advent of the summer months, we do expect to get busier. It has been difficult though, because we haven’t been able to meet on train during the lockdown”, says Martin.

“We have 24 members at the moment and two-thirds of those are trained in search and recovery. The club is registered with the Irish Coastguard. It’s been hard for members being unable to meet up as we usually did on Thursday nights at the Coral Leisure Centre in Roscommon. We used to also train in Portrun during the summer, but we haven’t been able to do that either.”

Since its foundation with five members, the club has grown over the years. Throughout its history, over one hundred and fifteen divers have been trained and have enjoyed diving in the lakes and rivers of Roscommon before going on diving excursions around the coast of Ireland.

Despite these unprecedented times of lockdown, the club are looking to the future. “We always try to upgrade our equipment. We are seeking to acquire a compressor to pump air into our oxygen cylinders which costs approximately €15,000 to purchase.

The clubhouse, measuring approximately 5,000 square metres, has been in use since 2009 and houses a 7.5m inflatable boat, a van, jeep and a large electric compressor as well as drying rooms. Members fund the cost of their own equipment, which can be much as €1,300 per annum for wet suits and apparatus.

“We would also like to upgrade our jeep for towing our boats and currently have two jeeps and two boats in our possession. So our running costs to operate the club can be considerable” says Martin, who wishes to acknowledge the support of Timothy’s Londis in Roscommon and Jones Oil Athleague in support of their bingo.