A dog owner has warned about the dangers of Trodax after its spaniel was killed by suspected poisoning in the Boyle area on Wednesday.

The post on realboyle.com detailed how the spaniel, named Molly, regurgitated three sausages, which were bright yellow in colour (see below), before she died.

A vet subsequently confirmed that the dog’s death was indicative of Trodax poisoning, which is often used (illegally) as a bait poison to kill foxes during the lambing season.

Trodax is a liver fluke treatment for cattle and sheep. However, it is fatal to dogs if ingested, with no antidote.

The post urged all dog owners to be vigilant and to report any such activity to Gardaí. 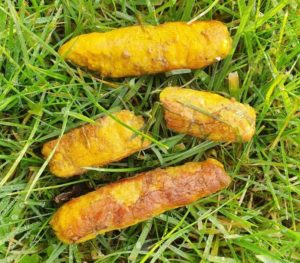