On this day: Roscommon edge out Donegal to reach league semi-final 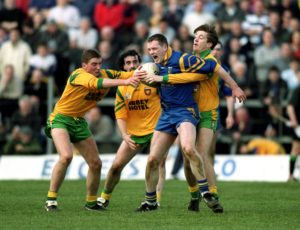 Roscommon’s Derek Duggan is tackled by Donegal players during the league meeting between the counties in 2000. Picture: INPHO/Patrick Bolger

As the Roscommon senior footballers prepare to get their season underway next month, this day, 21 years ago, manager Gay Sheeran was masterminding a famous victory against Donegal, which procured the Rossies a place in the Division One League semi-final against Derry.

Roscommon didn’t look out of place among some of the best teams in the country in Division 1A, having emerged from Division 2A a year previously.

Victory against Dublin (1-10 to 0-6), thanks to a late Fergal O’Donnell goal, and a hard-fought 1-10 to 0-8 success against Armagh left Roscommon with their biggest league match in years — against Donegal in Dr. Hyde Park on April 9th, 2000.

Despite conceding a goal in the 51st minute, Roscommon reeled off the last five scores without reply to secure a famous 0-14 to 1-9 triumph, allowing them to edge out Dublin on scoring difference and reach the last four against Derry, where they subsequently suffered a 0-15 to 0-8 loss against a side inspired by Anthony Tohill in Clones. 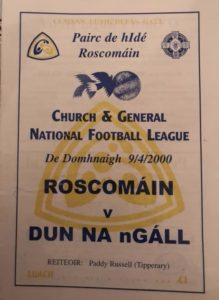