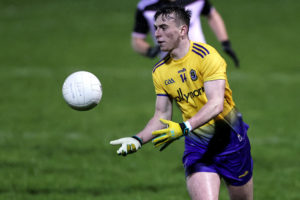 Roscommon minor football captain Eoin Colleran chats to IAN COONEY about life as a young intercounty footballer during lockdown, how Covid has hit Ireland’s youth very hard and that’s he remains highly motivated for a crack at Kerry in the All-Ireland semi-final…

It’s a quiz question that will flummox even the most ardent of sports quiz aficionados in the years to come — who was the last captain to lift GAA silverware in 2020?

The honour fell to Roscommon minor football captain Eoin Colleran on St. Stephen’s Day but the Padraig Pearses forward would prefer the question to be tweaked. For him, it has always been about the team.

“I’ve never really thought about that because it has been a tough year for everyone. We’ve never had a fair run at it. But just to have something to show for it, especially being the last team in the country to win something — I’m sure it may well be a quiz question down the road. I was just delighted for all my friends and team-mates that there was something in it for us.

“It was also great for Emmet (Durney) and the management, and for all the coaches and managers who helped us get to that stage. We wouldn’t be where we are without them,” he reflected.

That victory against Sligo, made famous by its execution in a winter storm named Bella, was completed at the 11th hour as the country prepared for a third lockdown. Afterwards, given the surreal circumstances, Eoin admits that he shed a tear with his father Aidan.

At that stage, Roscommon knew they were playing Kerry in the last four. What Eoin and his team-mates didn’t realise was that the waiting game would still command their attention over three months later.

“We started in January 2020, so we’re at it a year and four months now. It has been constant stop and start. It has been tough to keep yourself motivated but you do it because you know the end result is going to be one that you’ve worked so hard to achieve.

“Lockdown has been tough for all intercounty players. You need to make a lot of sacrifices. Then, waiting for that clarity on when we might be back, it’s hard to find that motivation sometimes. But you keep remembering what you’re building yourself towards — in our case, it’s an All-Ireland semi-final against Kerry. Personally, that’s more than enough motivation.

“As a player at this level, you’re giving up your free time, making diet choices, maintaining a steady sleep schedule, even financial sacrifices. But you just know that it’s going to be worth it in the end,” he explained.

Having turned 18 years of age on January 7th, Eoin finds himself in the unusual position where, in normal circumstances, he’d be currently overage for U-17 level. But these are unprecedented times.

A Leaving Cert student in Garbally College, Ballinasloe, the important matter of an Irish oral occupied his mind on Monday (yesterday). In February, he would have loved to make Páirc and Phiarsaigh his oyster to relieve the stress when this year’s Leaving Cert format was riddled with uncertainty.

At least, there has been some clarity on that front in the meantime. His educational bar has been set high — a shot at primary school teaching at third level. But, like every person his age, he accepts that the pandemic has changed his life in ways he could never have envisaged.

“I missed out on a proper club championship (with Pádraig Pearses). Usually, we’d play every other team, but it ended up being straight knockout. We had a right good team at schools’ level. We had a new coach, but we never got going, which was disappointing because it was our last year of football with the school. A lot of players were left deflated,” he recognised.

But while Eoin has something tangible to work towards from an academic and sporting point of view, he counts himself fortunate. He knows that Covid-19 has hit Ireland’s youth the hardest.

“A lot of my friends are finding it very tough. They don’t have access to a GAA pitch because they’re all closed. Going for a 5k run or kicking the ball around in the garden isn’t the same for them. A lot of young footballers have ended up quitting over the last year. You have to try and keep doing it to stay interested. You have to keep asking yourself why you’re doing it and why you love this game?

“Life has been tough, and when it is you just have to stop and think about your friends and family, and all the people who have got you to where you are as a person and a footballer. Sometimes it will be painful in life, or on the pitch. But pain is only temporary, victory lasts forever. Even as something as simple as looking at a family photo, it will put a smile on your face.

“A lot of people I know have been through mental health issues. You have to expect that with no socialising or no sport. You feel for those people. So, it’s up to the people who aren’t going through that to be there for them, helping them out and pulling them through. What’s on the other side is worth fighting for. We’re all in the same boat and we just need to be there for one another,” he explained.

For Eoin, however, the motivation comes from within. He has learned so much from his father Aidan, while his mother Carol has an equally reliable shoulder to lean on. Younger brother Darragh (14) is also rooted in his corner, especially when it comes to training.

“It was nice to have a family member present (for the Connacht championship matches). When things were tough, you just looked up into the stand and saw them. That’s why you’re doing it.

“I take it year by year. I set out goals for myself, put them on a piece of paper and put them under my bed. I take them out in January to see how far I’ve come.

“I’ve been doing that for the last few years. I always try to aim higher and higher. It’s really beneficial and I’d recommend it to any young player because it’s one way of keeping yourself very motivated,” he highlighted.

While club is paramount to Eoin, he can’t wait for the chance to test himself against Kerry, a game he believes will eventually take place.

“It will be the biggest game that every person on the Roscommon team will have played in. Of course, it’s tough when you don’t know when it is. But, being honest, we’re not unduly worried as long as the game is played.

“We’re very confident that we’ll put it up to Kerry and hopefully make an All-Ireland final. We know that we’re good enough. It’s about showing the hard work we’ve done over the last year because we know that we’ve cut no corners.

“It would be awful unfair if it wasn’t played, not just for us but for teams like Offaly and Meath that are in the Leinster final. Maybe I’m being selfish, but I really believe that we have a right good chance of winning it out whenever it does resume,” he predicted.

There’s also the matter of appreciating the messages of support the team have received since the Connacht final in conditions Eoin described as the worst he has ever played them. Despite many of his team-mates shivering with the cold, they listened intently to their captain as he thanked the loyal Roscommon support, many of whom couldn’t be present to share in the team’s special moment.

“We have the most passionate supporters in the country. After the Connacht final, I called them the 16th man. It’s so important to have that support and interest in the team. When you’re in a county like Roscommon, you don’t get any better support than that. We do it for them as much as we do it for ourselves.

“I hate being referred to as the captain. There should be 15 captains on the pitch. We’re one big family. We’re going to pull each other through. I have the letter ‘C’ beside my team but that doesn’t matter to me. I just want to be part of a Roscommon team that reaches an All-Ireland final, and hopefully win it out,” he concluded.

Given the year Eoin Colleran has just endured, stranger things have happened.