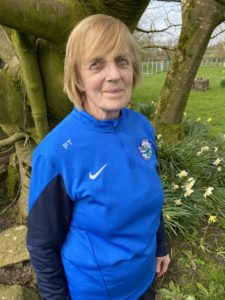 After the conversation about St. Croan’s GAA Club draws to a conclusion, Patricia Towey throws a question this reporter’s way — about my own roots. When I say that I’m from Ferbane in West Offaly, Patricia mentions that she has a son living in Tipperary, and that she passes through the area all the time.

Now, like any Offaly native, I’m fiercely proud of my own county, but I can still see that the subtle beauty and character of the place is not always obvious to people who don’t get to spend a lot of time there.

Patricia, however, sees things differently. She immediately talks about some of the hidden treasures in the area, including the Harry Clarke windows in Pollagh Church, or some of the incredible bog oak sculptures in Boora.

While it’s nothing to do with St. Croan’s GAA Club, it still gives an insight into the character of Patricia, and why she’s such a valuable part of the parish on the West Roscommon/Galway border. Throughout everything, she sees the good and the positive side of things, and you come away from the conversation realising why the club thrived around her involvement.

Having grown up in Ballaghaderreen, her Mayo colours were firmly nailed to the mast. But she still held a soft spot for her neighbouring county. She was an ideal recruit for a rural club and parish that extends well into County Galway, almost into Glenamaddy village.

Ballintubber, Enfield and Ballymoe are distinct areas with their own histories and traditions. For example, Patricia refers to the stronger handballing culture at the Ballymoe end of the parish, while at the same time highlighting the incredible unity that St. Croan’s has brought to the area.

“When I came here first, we were just a small junior club, but over time, and largely on the back of the national schools, we got up to intermediate and it just became the big thing for every family around.

“The schools had the foundation work done, then the club started fielding underage teams and there was no problem with numbers. Everyone had large families and we never had to go down the age groups looking for players to make up teams,” she recalled.

Trophies won, or successful days on the field, these don’t feature strongly in Patricia’s recollections of her time with the club. For her, it’s the personal side of being involved that stands out. She served in a host of roles, including secretary and chairperson. But, for her, the title was never hugely relevant.

“Everybody did everything, and if you needed help there was always someone on the end of the phone. It was always about the well-being and the welfare of the players, because you just end up getting to know them all,” she said.

“We were lucky that we didn’t have too many injuries down the years, but I remember that horrible feeling when someone might have got hurt in a game, and you’d be dreading the trip home to tell their Mam and Dad.

“But that’s all part of it. One of the biggest things about GAA is that not every day is going to be a good day,” she outlined.

For Patricia, inclusion was all-important.

“There’s always going to be a child where they might not have all the skills, but you still want to make sure they know that they can make a contribution, and that people will appreciate that contribution, even if that’s just looking after the flags, or the footballs, or something like that.

“I was very proud when we used to play rounders as well, that would bring other children into things, and we competed in an All-Ireland in the community games in that.

“Now I look around and it’s wonderful to see the ladies’ club flourishing, and that’s bringing more people in, and that’s fantastic.

“There’s a great nature and a tremendous spirit in people, and it was a privilege to be part of it.

No doubt everyone else in St. Croan’s and the wider GAA community would say the same about working with Patricia Towey.