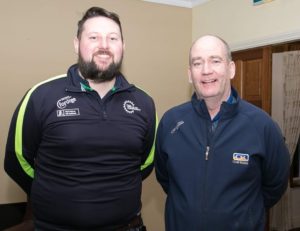 The list of possible reasons why a person might take on a task within a local club is endless, and Rory Curley’s justification for serving as club photographer in Pádraig Pearses will resonate with a lot of people.

“I like to take the photographs because it means I don’t have to be in any of them,” neatly sums up the approach of the ESB employee. If there’s something that needs to be done, step in and help out, but under no circumstances be seen to do so.

Of course, in any club, there’s always something that needs to be done, and more often than not in Woodmount, regardless of the job at hand, Rory has been the man to call. In his role as PRO, he set up the club’s website and built up its social media profile, while his more practical involvement includes deploying his electrician and general handyman skills, not to mention a lifetime of coaching and officiating roles.

He’s accumulated a fair few stories in his time across those various roles, but most of them have a common theme — utter practicality, and not taking himself too seriously.

Perhaps the best one that sums up the man is from his time as underage secretary many decades ago, when a family from Strokestown had moved to Creagh, including a very promising young U-12 footballer.

“The lines between Creagh urban, where you’d play with Ballinasloe, and Creagh rural which comes to us, can be a bit blurred at times. The whole division was done by the Brits back in the day, and nobody really pays too much heed on them.

“This lad was from Roscommon, his family on both sides were staunch Roscommon GAA people, he wanted to play in Roscommon, and we were delighted to have him.

“We played a Roscommon Gaels team featuring the one and only Fergal O’Donnell in the county final, and after a humdinger of a game, we won it. But someone objected, so both myself and PJ Sweeney (club chairperson at the time) got a two-year suspension,” he explained.

“A few weeks later I got a phone call from Liam Martin to ask if I could referee a game in Athleague, and I said that I could hardly do that, since I was suspended.

“Liam’s response was that the suspension had been imposed, but sure they could suspend the suspension. I said that’s fine, but I wasn’t going back without PJ, and Liam told me that he had already refereed a game the previous weekend!

“The best way of describing it is that we lost the battle, but ended up ignoring the war. Of course, I’m telling that story so long, I’ve no idea how much of it is true or not, but I’m sure some of it is. The two important things anyway are that the young lad went on to play a full career with Pearses, and I don’t think the cup ever made it back to Roscommon Gaels!”

In all the conversations for the Hidden Heroes series in the Roscommon Herald, this chat with Rory is as short as any of them, because he’s on his way out to Cloonfad church to help out with the live streaming of Good Friday services. Thankfully, there’s no better man to sum up the roots of his GAA involvement succinctly, and in a typically good-humoured fashion.

“The beauty of the GAA is that you get to see young players grow up through the club, and to work with other people who are there because they care about it.

“It’s a special breed of person you deal with. You could have a ferocious row with them one week, then ring them the next to borrow a set of jerseys and you know there’ll be no problem. I’ve had a lot of rows with people who have died since (he assures this reporter that the arguments and the deaths are unrelated) and you’d be honoured to have had that place in their life, and for them to have the same place in yours.”

After hanging up the phone, the thought occurs that it must be hard to have a heated argument with Rory Curley. Breaking out into laughter at a story of his is never too far away.