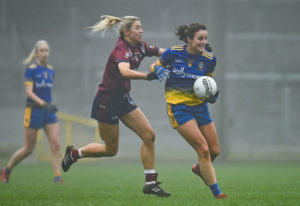 Jenny Higgins and her Roscommon team-mates will open their league campaign at home to Fermanagh.

The Roscommon intermediate ladies’ football team will have two home games in this year’s Lidl sponsored Division Three League campaign, it has been confirmed by the LGFA this afternoon.

Diane O’Hora’s side will open their league account against Fermanagh at a Roscommon venue on May 23rd before tackling Down, also at home, a week later.

Roscommon will finish their series of group matches with a trip to Sligo on June 6th (Bank Holiday weekend).

Sem-finals are due to take place on June 12th and 13th, with the final down for decision on June 26th/27th.