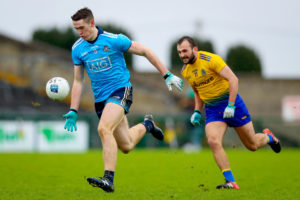 Dublin’s Brian Fenton and Roscommon’s Donal Smith in action during a league game between the counties at Dr. Hyde Park in 2019. Pic: INPHO/Tommy Dickson

While league fixtures will be officially announced by the GAA over the coming days, counties were sent their fixtures on Monday evening.

After hosting the Dubs, Roscommon will be away to Galway, currently fixed for Pearse Stadium, on Sunday, May 23rd.

Anthony Cunningham’s charges will then welcome Kerry to Dr. Hyde Park on Sunday, May 30th.

The Roscommon senior hurlers will be the first team in the county to taste league action in 2021 when they open their Division 2B League campaign away to Donegal on Saturday, May 8th.

Homes games against Mayo on May 15th and Kildare on June 6th will follow before Johnny Keane’s side finish up their campaign with a trip to Derry on June 12th.

Meanwhile, the draw for this year’s Connacht Senior Football Championship will be held on Monday next.