Hyde well down the list in GAA grounds rankings 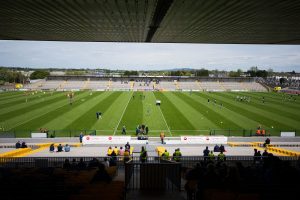 Dr. Hyde Park has been placed well down the list in an assessment of every county GAA ground in the country published by the Irish Independent on Saturday.

Roscommon main GAA stadium is 20th on the list, highlighting the need for some much-needed investment at the venue.

The Indo’s Frank Roche, who compiled the rankings, said: “A big old saucer crying out for some modern touches. Thankfully the old pitch, arguably the worst in Ireland circa 2016, was dug up; its replacement was three times shortlisted for pitch of the year.

“The venue was only allowed host the 2018 Connacht Council subject to capacity being capped at 18,870 amid several other conditions. On the plus side? We love the press box view, graveyard (of champions) included.”

MacHale Park in Castlebar was the Connacht ground with the highest ranking (10th) despite its glass-fronted press box “in Mars” and the pillars obscuring the view from the main stand.

Pearse Stadium, Salthill, came in at 25th, mainly because of issues surrounding traffic and weather on big match days.

Páirc Seán in Carrick-on-Shannon, who came to the Rossies’ rescue for a league game against Dublin in 2016, was ranked 16th, while Markievicz Park, Sligo, came in 19th.

Bottom of the list was the Gaelic grounds in Drogheda.