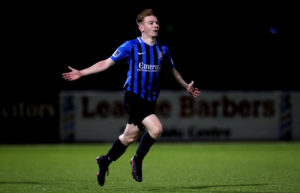 Kiltoom native Adam Lennon is lining out with UCD this season.

The new League of Ireland season is up and running. When it comes to local figures involved in Irish domestic soccer, John Caulfield is often the first name that springs to mind. The Lecarrow native will be hoping to lead the Galway United promotion charge from the First Division, but he will cross paths with a fellow Rossie in Adam Lennon when Galway United face UCD.

The 18-year-old Kiltoom native will be lining out with the Students after joining his new side from Athlone Town, having spent the last two years with the midlanders’ first team.

Lennon describes Athlone as “my club”, and it’s easy to see why. His family connections go back to when his father Dermot played, and managed, the “Blue and Black of the Midlands”.

“He was finishing up when I was growing up”, recalled Lennon. “He went on to become the assistant manager, before taking over in 2008. That team were my heroes, as I was in and around the team, going on the buses for the away matches,” he continued.

“We used to play five-a-side every Monday and Wednesday and the interest grew from there”, he outlined.

As is the case with most children, he tried his hand at a number of sports, including Gaelic football and rugby.

“I started playing football with St. Brigid’s around the same time I started the soccer. I played them side-by-side right up to U-16. From U-8s at Community Games level, we won county titles all the way along. For a few years in between, I played rugby with Buccaneers,” he remembered.

South Roscommon is building a good reputation for producing top class athletes. In rugby, Jack Carty has represented Ireland at a World Cup and Niall Murray is making the breakthrough with Connacht. Now Lennon — a rising soccer prospect in many people’s eyes — is hoping he will be added to this list and believes the short distance to Athlone benefits South Roscommon sportspeople.

“The access to different sports helps a lot. I’ve got to play three, so you get a good indication of what you’re best suited to. We’re only ten minutes from Athlone where there are stadiums with the opportunity to use plenty of facilities that the rest of Roscommon might not have as easily,” he conceded.

Despite his talents on the field of play, education is vital to the young Kiltoom man. The former Ballybay National School and Athlone Community College pupil is studying Sports and Exercise Management in UCD. Securing a solid background remains a big ambition for the First Year student and takes precedence over a potential move across the water to pursue a professional career.

“The mindset of most people in Ireland is that if you’re good at soccer, then you’ve got to head over to England. But the odds of making it are slim, with two-year scholarships and not being on much money. Most players struggle to find a club. I always made sure that I’d get a Leaving Cert and go to college,” he explained.

Strong performances at the Kennedy Cup with the Athlone District Schoolboys League, followed by a successful trial at Lissywoolen, saw the midfielder sign for Athlone Town at U-15 level. As he moved up the underage grades, the now 18-year-old has endured the highs and lows of the game.

This was no more evident than last autumn when the First Division club embarked on an eventful FAI Cup run. They pulled off the biggest shock of the 2020 edition of the competition, hammering Shelbourne 4-1 in the last eight.

But Athlone were firmly sent crashing back down to earth in the next round, when a star-studded Dundalk side fired 11 goals past them four weeks later. That chastening experience proved to be Lennon’s last game in the Blue and Black — for now at least.

Having accepted his scholarship with UCD last September, he has joined Andy Myler’s charges for the current campaign. The students were in the Premier Division as recently as 2019 and suffered play-off heartbreak against Longford Town last season.

It could be argued that the second tier of the domestic league is stronger this season with Cork City and Shelbourne dropping down, but ambitions are high among the South Dublin outfit.

“The goal is to win the league,” he stated.

“The new signings have been great and there is a feeling around the camp that this is a stronger squad than 2020. There’s a chance for us to get points on the board in the early stages, and a good start could be the difference” he concluded.