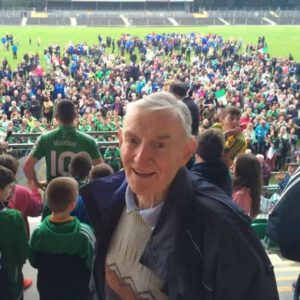 Canon Liam Devine reflects on the recent death of his boyhood hero, the late Packie McGarty from Leitrim…

This week, for a change, I am going to devote my entire column to one man — the iconic former Leitrim footballer Packie McGarty.

Packie died on Tuesday of last week at his home in Terenure surrounded by his family. He was aged 88. If I were asked to name my favourite footballer of all time, apart from Gerry O’Malley and Dermot Earley, I would have no hesitation in naming the Mohill man. In fact, he was my boyhood hero.

In our games in school or in a local field on a Sunday afternoon, we all wanted to be McGarty. I would rate him as one of the finest footballers I ever saw playing the game.

The late Jack Mahon of Galway wrote about him in his book ‘Action Replay’: “A veritable ball of energy, Packy could turn on a sixpence and I have no doubt that for sheer football skill, ball-carrying ability and the facility to keep going forever he had no peers in his own county and few peers as a dashing half-forward outside it.”

A native of Gorvagh near Mohill, Patrick Joseph McGarty was born on April 29th, 1933. From his primary school days, he showed promise as a footballer. It would be hard for young people who never saw him playing to appreciate just how good McGarty was.

If you can think of the fastest forward playing football today with ball control on a solo run like a magician, then add the toughest player today who would go through the proverbial stone wall and add in a player who could score points for fun, then McGarty was all three rolled into one.

Packie had an amazing career in the Leitrim jersey that spanned four decades. He must be one of the few footballers ever to play senior intercounty football before he played with his county’s minors.

He made his senior debut in a league game against Offaly in November 1949 at the age of 16. He scored a goal and a point on his senior debut. The following summer he was chosen on the Leitrim minor team. He continued playing for Leitrim until 1972 and he retired from the game altogether in 1973.

During most of the 1950s until he returned to Ireland in 1964, he worked on the buildings in London. He never failed to return home to play with Leitrim on a Sunday before taking a flight back to London that evening.

I will never forget the 1958 Connacht final in St. Coman’s Park. It was my last year in primary school and it was my first Connacht final.

I will never forget McGarty’s display that day. I don’t think I have seen a greater exhibition of football in a championship game from any one player. If ever a player won a game on his own, McGarty went very close to it that day.

I remember seeing him going towards the dressing room at half time and his jersey was badly torn. By full time, that jersey was in tatters, it was streaming down behind him just hanging by one sleeve. If there had been yellow or black cards in those days I believe Leitrim would have won because at least two Galway backs would have walked for their treatment of McGarty.

Packie wasn’t a big man. He was just 5’ 8” and a few pounds under 13 stones in weight. He was stocky and powerfully strong. Despite his lack of height, he could field a ball over the tallest of opponents.

Long before it was fashionable for forwards to play deep to help out the defence, Packie often took the ball off his own goal line. I remember, on one occasion, a high ball dropped into the Leitrim goalmouth and he jumped head and shoulders over a cluster of players to brilliantly field the ball. He set off on a solo run that took him the length of the field, displaying an amazing swerve and fantastic control of the ball.

You could see his jersey stretching as Galway backs tried in vain to halt him in his tracks. He would run straight at backs, either breaking the tackle or leaving them stranded with a fantastic swerve.

Galway led by 2-4 to 0-6 at half time and seemed to be on the road to an easy victory. Frank Stockwell and Joe Young scored the two Galway goals.

Writing in the Irish Independent the following day, Donal Carroll had this to say: “For the following 30 minutes however, the losers won the admiration of many of the estimated 12,000 attendance and they showed that no task is too great if one has the heart and appetite for it. And heart and appetite these Leitrim players had in abundance. Inspired by the incomparable Packy McGarty, whose greatest hour this was, they set about their work with an enthusiasm which put them on level terms at the turn of the final quarter.”

Another brilliant Leitrim forward, Cathal Flynn, cracked home a goal midway through the second half and ‘Gael Óg’ wrote in the Leitrim Observer “Roscommon shook that day.”

Galway rattled off three points in the last quarter to eventually scrape home by two points. McGarty was deservedly carried shoulder high from the pitch after his display.

Leitrim reached the National League semi-final in 1959 but lost to Derry in Croke Park.

By that time Packie was living and working in London but he was back for the semi-final against Mayo that June. Leitrim beat Mayo after a replay in which he again excelled.

Gael Óg wrote in his report in the Leitrim Observer: “With the wind now favouring Mayo (in the second half), McGarty came down to his own line of defence and from there to the end he led incursions through the Mayo defence which were a thrill in themselves. When securing possession in his own defensive area he could be compared to a small ship facing the broad Antartic and its perilous regions. The glaciers were there in the form of the Mayo defence and midfield but, unlike the silent mountains of ice, the Mayo men were mobile, rugged and determined.

With his fitness, which under any circumstances was a revelation, and his magnificent ball control, he succeeded in slipping past no fewer than six Mayo men on any occasion. These attacks, though not often rewarded with scores, relieved the extremely heavy pressure on the Leitrim defence and saved the day for the county.”

Packie’s genius wasn’t rewarded with silverware. He won a Connacht junior medal with Leitrim in 1952, beating Mayo by 1-7 to 0-2 in the provincial final. Leitrim reached the All-Ireland ‘Home’ final against Meath, a game Meath won easily by 0-11 to 0-2.

Because Leitrim didn’t play championship football outside of the province, the Railway Cup competition afforded a wider following the opportunity to witness his skills. He was chosen on the Connacht team in 1954 at the age of 20. Connacht beat a fancied Munster team in Tralee. McGarty scored 1-4 from play in that game.  Connacht won the Railway Cup in 1957 by beating Munster in the final. Packie gave an exhibition in that game despite being marked by the great Kerry right half-back Seán Murphy. There was just one Roscommon man on that 1957 team, Gerry O’Malley in the unusual position of right half-back. Another Leitrim man, Noel Blessing was at midfield on that team

Connacht won the Railway Cup again in 1958. Packie was, once again, at left half-forward and this time he was marked by the late Paddy Harrington of Cork. Aidan Brady was goalkeeper on that team and Gerry O’Malley was centre-back. Leitrim’s Cathal Flynn was at left corner-forward on the team.

Connacht won the Railway Cup in 1967 by beating Ulster by 1-11 to 0-7 in the final.  By then, Packie, having lost some of his pace, was among the substitutes. Leitrim had no player on the starting 15. Dermot Earley, still a minor, came on as a substitute for Connacht

Packie McGarty was chosen on the Ireland team that played the Combined Universities in 1957 and 1958.

He was chosen on the Connacht Team of the Millennium. He was also included on the Gaelic Football Team of the Century, of the footballers who never won an All-Ireland.

Packie McGarty was a deeply religious man. After he retired from his Clondalkin shop in 1998 he and his wife Ellen visited many religious shrines throughout the world. He attended Mass every morning in his local church St. Pius X in Templeogue.

When the lockdown came, he and Ellen went to the church every day to pray. That quality of life was reflected on the field of play. He was an exemplary sportsman.  Despite getting dog’s abuse from opponents I never once saw him retaliating. He was a gentleman to his fingertips, both on and off the field.

I first met him at Mattie McDonagh’s funeral in Ballygar. A few years later, he was in Lourdes on a pilgrimage that I also attended. He was with a different group and stayed in a different hotel but I met him at the airport as we queued up for the flight home. He was always pleasant to talk to, so friendly and so unassuming.

It is a pity that he didn’t win more medals on the field of play. But there is an old saying: “when the great recorder comes up against your name, it is not whether you won or lost but how you played the game.”

Very few played the game like Packie McGarty. May he Rest In Peace.