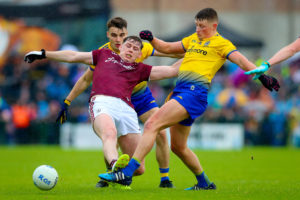 Tom Flynn and Conor Cox will meet for the first time this year in Pearse Stadium on May 23rd.

The GAA has confirmed the dates, times and venues for this year’s Allianz National Football and Hurling Leagues.

The Roscommon senior footballers will open their Division One campaign against Dublin at Dr. Hyde Park on Sunday, May 16th at 1.45 p.m..

Seven days later on May 23rd, they will travel Pearse Stadium, Salthill, to meet Galway at 2 p.m. in what will be a dress rehearsal for this year’s Connacht semi-final later in the summer.

Anthony Cunningham’s men will end their campaign at home to Kerry in Dr. Hyde Park on Sunday, May 30th, at 3.45 p.m..

Meanwhile, the Roscommon senior hurlers will travel to O’Donnell Park, Letterkenny, on Sunday, May 9th, to open their Division 2B campaign against Donegal at 2 p.m..

Johnny Keane’s side have a break until Sunday, June 6th, when they will entertain Kildare at Dr. Hyde Park at 2 p.m. before travelling to Celtic Park, Derry, to take on the home side on Saturday, June 12th.

Sunday, May 9th: Donegal v Roscommon in Letterkenny at 2 p.m.