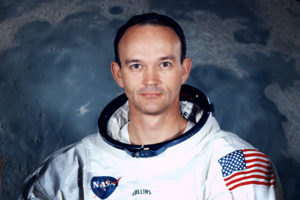 Collins, who stayed behind in the command module of Apollo 11 on July 20th, 1969, while Neil Armstrong and Buzz Aldrin travelled to the lunar surface to become the first humans to walk on the moon, died at the age of 90.

A post on Mount Talbot — A Journey through the Ages Facebook page recalled that the famous astronaut had “close links” with the East Galway area.

“Michael Collins was a great-grandson of a Cunniffe family that had been evicted by Lord Ashtown during the infamous Funchinagh evictions in 1851 (north-east of Four Roads). His grandmother, Mary, was two years old. Relatives in Corrocot, Mount Talbot, took in the family and they stayed there for a number of years,” recalled the post.

The post goes on to say that when Mary was 16, she emigrated to the US where she became a sheep farmer in the mid-west. She married a fellow Irish emigrant and they had a daughter who went on to marry an Irish-American soldier called Collins. Their son was Apollo 11 astronaut Michael Collins.

The post highlights how Collins later received the NASA Distinguished Service Medal, Air Force Distinguished Flying Cross, Air Force Command Pilot Astronaut Wings, Presidential Medal of Freedom and Congressional Gold Medal. Together with Armstrong and Aldrin he received the Collier Trophy, the Hubbard Medal and the Langley Gold Medal. He has had an asteroid and a lunar crater named after him.

“This family had gone from sitting huddled together and starving after eviction in Funshinagh to being part of one of the greatest achievements in human history. RIP to a remarkable man,” the post concluded.