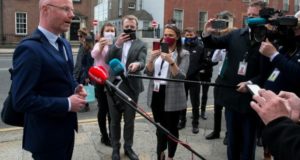 The Cabinet has approved a plan to significantly ease Covid-19 restrictions over the coming weeks. The plan will be unveiled by An Taoiseach Micheál Martin later this evening.

Ministers met on Thursday afternoon to sign off on a faster than expected lifting of curbs, approved by a Cabinet sub-committee last night. However, according to the Irish Times, the plan will have to be revised if infection numbers increase as economic and social activity ramps up.

From May 10th, the ban on intercounty travel will be lifted. Personal services such as hairdressers re-opening by appointment and larger groups allowed to meet outdoors will be permitted. Religious services would also resume from that date, though with constraints on attendances, as would training for sports teams.

Under the plan, which is based on expectations that the vaccine rollout will be greatly accelerated and that infections will not surge, retail outlets would be able to offer click and collect services from May 10th ahead of a wider resumption for businesses on May 17th.

Outdoor hospitality, including restaurants and pubs, would resume on June 7th while hotels would reopen on June 2nd. Gyms and swimming pools would also reopen from June 7th. Outdoor sports matches would also return from June 7th, but without spectators for now.

However, the Government was warned that a full assessment of the pandemic situation would be needed before moving to the next phase of measures in June.

Well-placed sources said the National Public Health Emergency Team (Nphet) advised that visitors from one other household could be permitted from June 7th. The advice makes no reference to the vaccination status of people involved in these visits, raising the prospect of unvaccinated households mixing in early June.

It is further understood that limits on the size of outdoor meet-ups will not count children under 12. Sources said that younger children would not be included when taking account of a mooted six-person limit to outdoor activities, which will enable more latitude for family meet-ups outdoors.

Outdoor meetings may also be allowed of more than six people, if it does not exceed three households mixing.