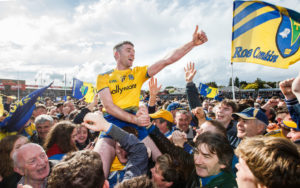 Roscommon may be able to hear the “Rossie Roar” for the first time in 16 months at Dr. Hyde Park for their Connacht Senior Football Championship semi-final showdown against Galway in early July.

Anthony Cunningham’s men are due to take on the Tribesmen, which is provisionally fixed for Sunday, July 4th.

The Government is currently considering plans to allow spectators back to matches, albeit at a reduced capacity, from July 5th, but there may be some wriggle room to allow for GAA fans to attend matches on the previous weekend.

Roscommon supporters haven’t seen the Rossies in action since their 1-16 to 0-12 Division Two League victory against Westmeath at Dr. Hyde Park on March 1st, 2020.

According to Minister of State for Sport Jack Chambers, the Government has drafted a “return-to-spectators” plan which may be tested at GAA matches and other sporting events later this summer.

It is also expected that the green light will be given for adult team sports training to resume from May 10th when the Government unveils its latest re-opening plans later today.

The resumption of competitive matches across sport is expected to take place from June 7th.