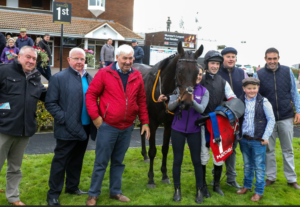 Will connections of Flooring Porter be celebrating once again in Punchestown later this afternoon?

Flooring Porter will harbour high hopes of a unique double later this afternoon when he runs at the Punchestown Festival.

Following a famous win in the Stayers Hurdle in Cheltenham last March, the famous black and white silks will line up for the Ladbrokes Champion Stayers Festival at 5.25 p.m. over three miles at the County Kildare track.

The horse will be reunited with regular jockey Jonathan Moore, sidelined due to injury for his Cheltenham triumph. On that occasion, Danny Mullins took the ride to record a pillar to post victory at odds of 5/1.

Trained by Gavin Cromwell, the horse is owned by a syndicate which includes father and son Tommy and Alan Sweeney from Creagh, former owners of the Country Man Inn pub in the village nestled in the heart of Padraig Pearses GAA country.

The horse which runs in the distinctive black and white silks of the ‘Flooring Porter’ syndicate is also part-owned by Alan’s uncle Kerril Creaven and his friend Edward Hogarty, both from Killimordaly over the Galway border.

For Alan and his colleagues, hopes are high that the horse can run another big race, in this, his sixth outing of the season. “It’s at level weights, though mares get a five-pound allowance. If he runs to his credit, he won’t be beaten,” he declared.

“We won’t know how much the Cheltenham run has taken out of his until he lines up on Thursday. But he freshened up well after Cheltenham and the horse seems well within himself. He’s been lightly enough raced and our ambition is to come back and defend our Cheltenham crown next season.

“To win at Cheltenham has been like winning an All-Ireland. It’s been a great boost to the communities we come from. Like in his other races, he’ll run in his own style and pace. We hope the going won’t be too hard at Punchestown, though they have been watering (the track)”, explained Alan.