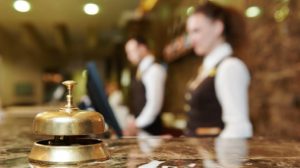 Hoteliers say there has been a surge in bookings since yesterday’s announcement on easing restrictions.

Hotels, B&Bs and guesthouses will be allowed to welcome guests from June 2nd.

The Government is to examine when people can holiday abroad, with Minister for Transport Eamon Ryan suggesting it will be later in the summer.

Irish Hotels Federation (IHF) President Elaina Fitzgerald-Kane says many of the bookings made since yesterday are for June.

“There’s great optimism, we’ve already seen a surge in bookings and interest. A lot of it was for June, in a way maybe we’re opening a little bit earlier than what we anticipated, but it certainly builds for a sustainable future because it’s been a very rough road over the last year in terms of opening and closing,” Ms Fitzgerald-Kane told Newstalk

The IHF is encouraging anyone planning a break to book early. Chief executive Tim Fenn is also welcoming the reopening of intercounty travel from May 10th.

“The fact that people can now travel between counties is also another boost because they’ve been locked down for so long and people can now start to lift their spirits and get ready to have a well-deserved break,” said Mr Fenn.