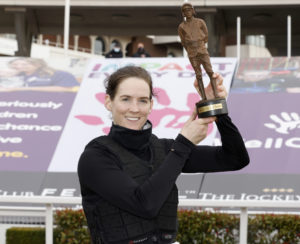 One of Ireland’s greatest sportstars has reached out to Ballaghaderreen’s Men’s Shed with an inspirational message of support.

Rachael Blackmore, who was the leading jockey at Cheltenham in March before going on to become the first female jockey to win the Grand National, is odds on to be crowned the country’s sporting personality of the year.

But she took time out from her hectic schedule to surprise members of Ballaghaderreen Men’s Shed by giving them some encouragement during the current pandemic.

“To all in Ballaghaderreen Men’s Shed — Don’t be afraid to dream, look what happened to me,” she wrote.

Pat Towey from Ballaghaderreen Men’s Shed takes up to story.

“The pandemic has really affected a lot of our members because of their own personal circumstances.

“So I wrote to Rachael and her parents to congratulate them on their success and told them a small bit about our Men’s Shed.

“I was absolutely gobsmacked that she replied. I’m sure she gets thousands of letters and messages but to send back a message like that shows what a class act she is.

“I will get it framed and put it up on our wall in the Men’s Shed, and it will remind our members that they have so much living to do. I hope the message inspires them to do something different and to really enjoy life,” he explained. 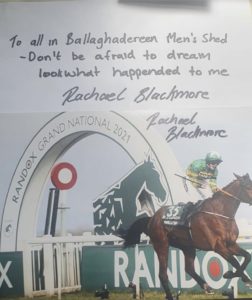