Roscommon stumble over the line in league opener against Fermanagh

Two goals from Laura Fleming and a series of outstanding saves from goalkeeper Helena Cummins were key factors in Roscommon starting this year’s Lidl LGFA National League with a win, but manager Diane O’Hora will still feel that there’s a lot of work to do in advance of what’s likely to be a much tougher test against Down in Kiltoom next week.

Roscommon enjoyed plenty of possession but struggled to find scores into the breeze in the first half at Dr. Hyde Park today, scraping to a 0-3 to 0-2 lead by the water break but then being forced onto the back foot by Ellen Irwin’s yellow card and sin bin.

Fermanagh, led by outstanding full forward Eimear Smyth, took the lead coming up to half time before a wonderful piece of combination play between Jenny Higgins and Laura Fleming led to the St. Ciaran’s played finding the net with a low right-footed shot, before Fermanagh equalised to make it 1-3 to 0-6 at half-time. 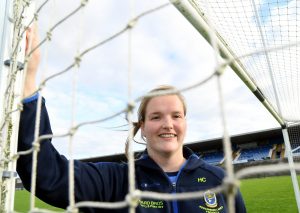 Helena Cummins had to make two crucial saves to preserve Roscommon’s lead in the second half of today’s contest at Dr. Hyde Park.

A series of points from Rebecca Finan, Fleming, Caroline Conway and 1-1 from Natalie McHugh gave Roscommon some breathing room in the third quarter but turnovers continued to haunt the team, and they need goalkeeper Helena Cummins to produce a couple of incredible saves to preserve their lead. The Michael Glaveys player couldn’t be blamed for the goal Fermanagh did score, producing a great low diving block to keep out Smyth’s strike only to see Joanne Doonan tap the loose ball into an empty net, but Roscommon replied with a superb goal from Fleming and then just about held on in the face of late Fermanagh pressure.