Plenty of positives for Roscommon despite Kerry defeat 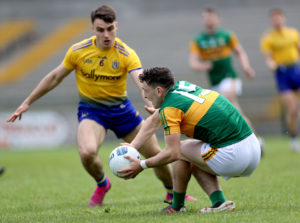 Roscommon produced their best performance of the league, despite going down to Kerry by six points, 2-15 to 1-12, at Dr. Hyde Park on Sunday afternoon.

When Kerry substitute Tadhg Morley was shown a straight red card, just seconds after his introduction at the second-half water break, Roscommon trailed by 0-13 to 0-12 and, given how well they had played, had every chance of causing a sensational shock.

But Kerry circled the wagons with David Clifford, who ended up with 1-4, grabbing a crucial 60th minute goal.

The game looked to be slipping away from Roscommon but Conor Devaney’s goal in the 70th minute gave them a lifeline.

But the chance to restore parity never came and substitute Joe O’Connor’s goal put the issue beyond doubt.

Ciaráin Murtagh and Shane Killoran were excellent throughout for the Rossies who will find out tomorrow (Monday) where their relegation play-off against Armagh on the weekend of June 12th/13th will take place.