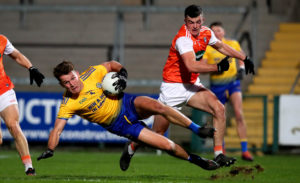 Roscommon will have to travel to an Armagh venue for their crucial relegation play-off match against the Orchard County following this morning’s toss for home venue.

Kieran McGeeney’s men will enjoy home advantage to see who stays in Division One next season. It has been confirmed that the game will take place on Sunday, June 13th, in the Athletic grounds at 3 p.m..

Roscommon beat Amagh in the Division Two League, 3-10 to 0-15, at the Athletic grounds last October, thanks to two Enda Smith penalties and a goal from Conor Daly, to effectively book their place in Division One this season.

The counties also produced a highly entertaining encounter during the 2018 heatwave when another two goals from Smith procured a famous 2-22 to 1-19 All-Ireland qualifiers triumph at Portlaoise, which paved the way for Roscommon’s participation in the inaugural Super 8s.

Armagh have been highly competitive in Division One (North), beating Monaghan in Enniskillen before losing and drawing at home to Tyrone and Donegal respectively.

But Roscommon will have taken heart from Sunday’s showing against Kerry and will hope to continue their recent good record against the Orchard County.